After a six day hiatus that included the 2012 NHL-All Star Break in Ottawa, the Winnipeg Jets return to action tonight on the road against the Philadelphia Flyers. 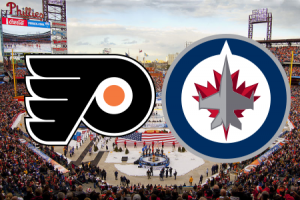 The Story:  We now return you to your regularly scheduled programming.

After a six day hiatus that included the 2012 NHL-All Star Break in Ottawa, the Winnipeg Jets return to action tonight on the road against the Philadelphia Flyers. The Jets have 32 games remaining on the 2011’12 NHL Regular Season schedule including the next four games on the road, a critical stretch that will have a significant impact on the team’s quest for the final playoff spot in the Eastern Conference. The Jets are in 10th place in the East with 50 points, five points behind the 8th place New Jersey Devils, who have two games in hand on the Jets.

The Jets are in a sensitive spot right now. The team lost two road games in a row before the All-Star break, including a demoralizing 3-0 defeat to the New York Rangers exactly a week ago. The Jets must now win at least two games this week on the road or they risk falling out of the playoff picture entirely.

Making the playoffs is going to be a gargantuan task for the Jets as they have struggled big-time on the road. The Jets have the 8th worst road record in the National Hockey League at 7-14-4 and play six of their next seven games on the road. To make things worse, the Jets are still without two of their best players, Evander Kane and Dustin Byfuglien, who are still recovering from lingering injuries.

On Monday, the Jets re-called Aaron Gagnon and Spencer Machacek from the St. John’s IceCaps of the American Hockey League. They are both expected to play tonight versus the Philadelphia Flyers. Alexander Burmistrov and Tim Stapleton are both day-to-day with injuries and will not play tonight.

Ondrej Pavelec is expected to be the starter in goal for the Jets tonight.

Who’s Next: The Jets next game is on Thursday, February 2nd against the Tampa Bay Lightning (6:30 p.m. CST).