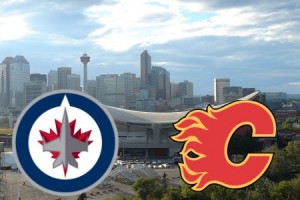 The Story: The Winnipeg Jets will look to rebound from last night’s 3-2 loss to the Vancouver Canucks with a win tonight against the Calgary Flames.

The Jets led the Canucks early in the 3rd period after a beautiful goal by Blake Wheeler but goals by Alex Edler and Sami Pahlsson sealed the deal for Vancouver, who outshot the Jets 45-32 in the game.

The Jets now sit in 9th place in the Eastern Conference with 72 points, tied with the Washington Capitals, who hold the 8th and final playoff spot with four more regulations wins (the Jets have 28 regulation wins, the Capitals have 32 regulation wins). The Jets lead the Buffalo Sabres by two points (both teams have played 68 games) and the Tampa Bay Lightning by three points (Tampa has played 67 games) in the ultra-tight Eastern race.

Including tonight, the Jets have eight games remaining on the road and six games remaining at home. After Friday’s game against the Flames, the Jets will have a much-deserved four day break before a three-game stretch at home that will feature games against the Dallas Stars (March 14th), Washington Capitals (March 16th) and Carolina Hurricanes (March 18th).

The Flames are in 11th place in the Western Conference with 72 points and are currently battling the San Jose Sharks (8th, 75 points),  Los Angeles Kings (9th, 74 points) and Colorado Avalanche (10th, 74 points) for the 8th and final playoff spot.

The Flames have run into some injury problems and currently have seven regular forwards out of the line-up including Michael Cammalleri, Lee Stempniak, Mikael Backlund and Blake Comeau.

2011 1st round pick Sven Baertschi (13th overall) will make his NHL debut for the Flames tonight. Baertschi has 33 goals and 61 assists in 47 games with the Portland Winter Hawks of the WHL this season.

This is the only meeting between the Jets and Flames this season.

Chris Mason may start in goal for the Jets tonight. Ondrej Pavelec has started the last four games. Stay tuned to Illegal Curve for the latest updates.

QUICKIES….. Join The Illegal Curve Crew at The Cheer Bar & Grill (corner of Osborne and Stradbrook) for tonight’s Jets/Flames game….