The Jets left the Empire State to head on down to The Garden State to take on the Devils in a Saturday night contest. 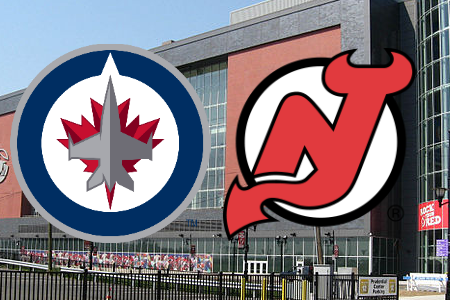 The Story:   It feels somewhat wrong that IC’s Ezra Ginsburg isn’t doing today’s Jets/Devils preview as New Jersey became his team when the Jets left town.  However he and the rest of the IC Radio crew will be in Newark tonight to watch his formerly favorite Devils take on the Jets.

This is hall of fame to be goalie Martin Brodeur’s second straight start after injuring his shoulder which forced him out for 6 games.  He played against the Leafs on Thursday where he gave up 5 goals on 23 shots.  This loss tied him with Curtis Joseph and Gump Worsley for most career losses (352) by a goalie.  The team overall has won just once in the last four games and are certainly expecting better as they kick off this 3 game home stand beginning with the Jets this evening.

The Jets are riding their first winning streak (2 games) of the season after beating the Panthers and the Islanders.  In fact they have won 3 of 4 on the road in what is going to be the longest road trip of the season.  Readers of Illegal Curve didn’t expect the team to have this much success as the overwhelming number (38%) predicted the team would finish the trip with 3 wins and 4 losses.