The Winnipeg Jets host the New York Islanders tonight in the 2012 Valentine’s Day Classic but don’t expect chocolates and flowers because all the Jets care about right now is wins and staying in the Eastern Conference playoff race. 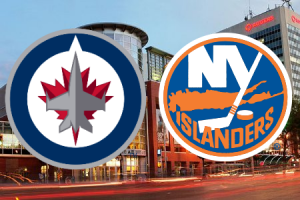 The Story:  The Winnipeg Jets host the New York Islanders tonight in the 2012 Valentine’s Day Classic but don’t expect chocolates and flowers because all the Jets care about right now is wins and staying in the Eastern Conference playoff race.

The Jets took a major step back on Saturday afternoon when they were bombed 8-5 by the Pittsburgh Penguins and now they must rebound with a home win against the Islanders, a team they should beat on paper.

The Isles and Jets have played twice already this season with each team winning one game on the road. The last time the Jets and Isles played was back on December 20th in Winnipeg, a game that New York won 3-2 in a shootout. Evgeni Nabokov earned the victory in that game after entering the game in place of Al Montoya while Frans Nielsen (who recently signed a four-year, $11 milion contract extension) scored the shootout winner in a game that the Jets dominated and easily could have one.

New York is a dramatically improved team from the beginning of the season; Nabokov has emerged as the team’s undisputed Number-1 goaltender and John Tavares has been one of the hottest players in the NHL in the second half of the season (Tavares was named 1st star of the month for January, leading the NHL with nine goals and 13 assists in 13 games.) Tavares is on pace for a career season this year and currently has 54 points in 55 games, which ranks him 12th overall in the NHL.

Tavares’ line mates P.A Parenteau (49 points) and Matt Moulson (48 points) have formed one of the most dangerous offensive trios in the NHL this season and the Islanders have managed to get themselves back in the playoff race after being virtually written off just two months ago.

As far as the Jets go, well the Jets are just glad to be back home again.

The Jets will play nine of their next ten games at the MTS Centre where they have a record of 16-8-2 and after Thursday’s road game against the Minnesota Wild, will play 8 consecutive games in a row at home, a favourable schedule that will ultimately determine if the Jets will be playing meaningful games once April rolls around.

The Jets will ice a completely healthy active roster on Tuesday night against the Islanders for the second consecutive game.

QUICKIES……The Jets traded forward Riley Holzapfel to the Anaheim Ducks on Monday in exchange for forward Maxime Macenauer. Macaneaur had one goal and three assists in 29 games for the Ducks this season…..Dustin Byfuglien has five points (two goals, three assists) in six games since returning from a knee injury…..Ondrej Pavelec has faced 1,388 shots this season, fourth most in the NHL….Pick up your official Illegal Curve New Era 5950 Fitted Hat, available online or at City Haul on 823 Corydon Avenue…..