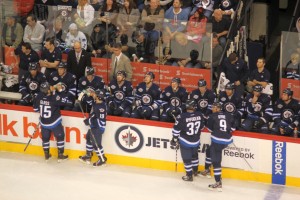 The Story: Tonight is the night many fans have been waiting for since the 2011’12 NHL Regular Season Schedule was released back in late-June as Teemu Selanne, one of the most popular Winnipeg Jets of all time, returns to the city where it all began. Selanne, who currently leads the Anaheim Ducks (9-17-5) in scoring with 31 points, was drafted by the original Winnipeg Jets in 1988 and spent three and half seasons in Winnipeg, including his rookie campaign in 1992’93, when he set the still-standing rookie record for goals (76) and points (132) in a season.

Tonight is undoubtedly a big night for fans, but it is also an important home game for the Jets (14-13-4), who will look to rebound from their first home loss in six games, and hoping to inch closer to the final playoff spot in the Eastern Conference. The Jets were defeated 1-0 by the Washington Capitals on a late goal by Alexander Ovechkin two nights ago in a game that can only be described as a stinker. Despite a decent start Thursday night, the Jets were flat most of the game and only managed four shots in the third period. The team’s top line of Evander Kane-Bryan Little-Blake Wheeler had their share of scoring chances, but could simply not beat Michal Neuvirth.

Thursday was an eye-opening experience for the Jets, and was reminiscent of the October 24th home game against the New York Rangers, a 2-1 loss which was a wake-up call for the team. The team’s response to that game was a 9-8 road victory over the Philadelphia Flyers, a game that has been cited as a turning point in the first half of the season. The Jets response to Thursday’s game cannot be understated, because of the fact that the Jets have been playing their best hockey as of late and have been able to avoid a two-game losing streak for over two weeks now.

The Jets opponent tonight, the Ducks, are not having a good season this year. In fact, they’re having an awful year. Despite having some of the game’s elite players, including Ryan Getzlaf, Corey Perry (last season’s Hart Trophy winner) and Bobby Ryan, the Ducks only have 23 points and are in second last in the Western Conference (27th overall). The Ducks lost 4-1 to the Chicago Blackhawks last night and have only won two games since Randy Carlyle was fired back on December 1st and replaced by former Washington Capitals head coach, Bruce Boudreau.

So how can the Jets take advantage of the Ducks tonight and get back in the win column? To be frank, the Jets have to take advantage of a team that is in a vulnerable position right now. The Ducks have not responded well to the firing of Randy Carlyle and have seemingly lost their identity. Consider this: With the exception of Teemu Selanne, every player on the Ducks is on pace for worse offensive totals than last year. The speedy, industrious Jets have the opportunity to capitalize on a struggling team that gives up turnovers and takes a lot of penalties. The Ducks have the worst road record in the league at 2-8-4.

The Jets line-up may have some changes tonight. Tobias Enstrom was expected to be out at least one more week but he has been cleared to play by the team’s training staff.  It is not known if he will make his debut tonight or next week. Also,  Antti Miettinen, who was acquired off of waivers from the Tampa Bay Lightning earlier this week, is eligible to play tonight. It is not known if Nikolai Antropov or Alexander Burmistrov will play tonight, but Antropov is considered a better candidate, because Burmistrov hasn’t skated in several days.

Chris Mason is expected to get the start in net tonight for the Jets. Ondrej Pavelec has started the last three games for the Jets.

QUICKIES…..The Jets will wear their white jerseys at home tonight. The Ducks requested the Jets wear white so that they could wear their alternate third jerseys, which are black…..On Friday, the Jets re-assigned Carl Klingberg to the St.John’s IceCaps of the American Hockey League. Klingberg had no points and four penalty minutes in six games with the Jets…. Zach Bogosian leads the Jets with 45 Penalty Minutes…..Listen to The Illegal Curve Hockey Show today (Saturday) from Noon- 3 p.m. CST on TSN 1290 Radio. Anaheim Ducks radio color analyst Dan Wood will be one of the guests…..