The Winnipeg Jets have a matinee date with the New Jersey Devils this afternoon at the MTS Centre and they’re hoping the feature presentation is a win. 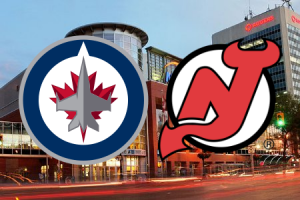 The Story: The Winnipeg Jets have a matinee date with the New Jersey Devils this afternoon at the MTS Centre and they’re hoping the feature presentation is a home win.

The Jets have lost four of their last five games with the most recent letdown taking place Thursday night, a 2-0 loss to the San Jose Sharks, a game in which the Jets were utterly and completely dominated. A productive month of December (10 wins) seems like a long time ago now for the Jets, who have been shutout twice in their last fives games and five times overall this season. The Jets currently find themselves stuck in 10th place in the Eastern Conference with 45 points, three points behind the 8th place Washington Capitals and just one point in front of the 11th place Buffalo Sabres.

The Devils and Jets have already met twice this season, with each team winning their home game. The last time the two clubs met the Jets defeated the Devils 4-2 at home on December 3rd which at the time pulled the Jets to the .500 mark for the first time all season and at the same time handed New Jersey their fourth consecutive loss. The game was also a chippy one that featured a third period fight between Jason Jaffray and Tim Sestito. 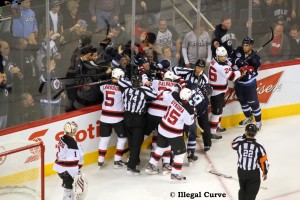 Even though the main priority for the Jets against the Devils will be  to earn two points, it will also be important to establish good work habits and discipline. The Jets can sometimes be a team that lacks focus and intensity. The Jets are stockpiled with gritty, hard working players (think Andrew Ladd, Tanner Glass, Mark Stuart) but the Jets have been letdown by missed assignments and coverages too many times the seasons. Tuesday’s disappointing 5-3 road loss to the Boston Bruins was a perfect illustration of how the Jets can completely erase two periods of good hockey with one period of lazy hockey. Ladd, the Jets captain, expressed his frustration after Thursday’s loss and essentially called his team out: “At some point we have to figure out, do we want to be a playoff team or are we content with being this win one here, win one there-type team?”

The Jets have an opportunity this afternoon to right the ship at home. It’s time for the Jets to walk the winning walk.

The Jets will again be without defensemen Dustin Byfuglien and Zach Bogosian against the Devils today.

The starting goalie for the Jets has not yet been announced.

Who’s Next: After today’s game, the Jets will go back to the road for their next two games. The Jets play the Ottawa Senators on Monday, January 16th (6:30 p.m.) and then visit the New Jersey Devils the next night on Tuesday, January 17th (6:00 p.m.).

QUICKIES……The Jets re-assigned Patrice Cormier to St.John’s of the AHL on Friday…..Evander Kane has not scored a goal in his last six games…..Dustin Byfuglien met with the Winnipeg media on Friday. Byfuglien was the lone Jet selected to play in the 2012 NHL All-Star Game in Ottawa. Byfuglien has missed the last eight games with a nagging knee injury but is hopeful he can play in the ASG…..The new Illegal Curve 5950 fitted hats are now available for sale at City Haul (823 Corydon Ave.)…..