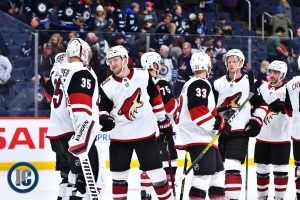 About an hour before puck drop Darren Dreger reported that there is a ‘Growing sense of optimism’ surrounding Dustin Byfuglien’s return.

After Mark Scheifele opened the scoring for the Jets with a power play goal, a late Coyotes goal by Conor Garland with eight seconds left in the 1st took away what was a pretty solid opening 20 minutes for the home team.  The middle frame saw the Coyotes score three times including twice on the power play to take a 4-1 lead.  The Jets tried to get back into the game but aside from a Kyle Connor goal on the power play they couldn’t get back into this one.

Coach Maurice:  Bad 2nd period or a theme for the team?   On the Coyotes power play.  Team still looking for an identity.  What does he want his team’s identity to look like when they reach that point?  Update on Bitetto?

Anthony Bitetto left the game in the 2nd and didn’t return in the 3rd due to a lower-body injury. Coach Maurice didn’t have an update following the game.

The Jets are set to practice on Wednesday as they get ready to face the Islanders on Thursday night.  Kick start your day with the AM Jets papers which go live at 7 am on illegalcurve.com.