A look at the game 70 projected lineups and pre-game audio. 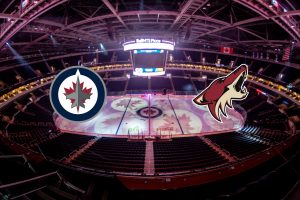 It has been 62 games since the Jets and Coyotes last did battle back on October 15th.  Now all these games later these two teams both find themselves on the outside of a playoff spot looking in with Winnipeg sitting two points up on Arizona.  The Jets are tied with the Canucks and Predators in terms of points but both those squads have played less games than Winnipeg.

The big news on Sunday was that there is a very strong possibility that Adam Lowry will return to the lineup provided he felt good this morning.  For now the lineup is based on the last game and will be updated when morning skate gets underway or when coach Maurice provides an update.

As per Scott Billeck centre Mark Scheifele is skating this morning at the optional.  He adds no Connor Hellebuyck which unsurprisingly means that he will be your starter.

Adam Lowry comes in as per Jets bench boss Paul Maurice and Jansen Harkins comes out.

With the NHL concerns about Coronavirus the player and coach interview formats have changed and will look a lot like what you see in the playoffs where players and the coach will be brought to a podium in pairs or trios.

Coach Maurice:  Status of Adam Lowry?  Who comes out?  Where will he play?  Difficulty in taking Harkins out.  Coronavirus situation.  More emotion from Connor Hellebuyck and the encouragement he gets from that.  Can other players feed off Hellebuyck?  Is this the best lineup they’ve iced this season?  Surviving the challenges of a limited lineup.  Loss of D (from last year) hurting the goals for this season.  What has stood out about the Coyotes recent play?  The competition to get back into the lineup among the forward group and what it can do from the team.  Status of Anthony Bitetto?

Defenceman Anthony Bitetto is dealing with an upper-body issue.  He is listed by Jets coach Paul Maurice as day-to-day.