A look at the game 7 projected lineups and pre-game audio. 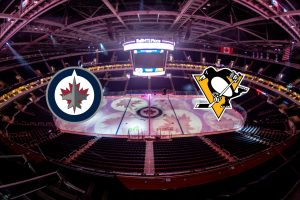 The Jets played their last Central Division opponent for awhile last night after they defeated the Hawks 3-2 in OT as they play just two within the division in the first 17 games of the season.  The Jets are the home team for the next six games although game number six is the Heritage Classic game in Regina against the Flames.

No skate today after the Jets played last night.

Coach Maurice was asked about the roster ahead of last night’s game in Chicago and he indicated that Laurent Brossoit will get the start in net against Pittsburgh.  At the end of the scrum when discussing having Dahlstrom in the lineup against his former club he said that had it been reversed (i.e they played Pittsburgh last night and Chicago tonight) so he would likely have left Ville Heinola in the lineup.  So perhaps we see a return of Ville Heinola for the game tonight.  For now the projected lineup with the exception of Laurent Brossoit getting the start remains the same until we hear otherwise.

Carl Dahlstrom took to the ice and Ville Heinola did not so no changes ahead of the game against the Pens.

Puck drop is at 6:00 pm CDT.  Be sure to head over to illegalcurve.com following the game for a recap of the action which includes post-game audio from the Jets room as well as from Coach Maurice.