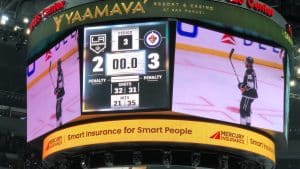 Jets cap the comeback by scoring two in the third (by Copp & Dubois), and win their fourth in a row, this one by a 3-2 margin and they improve to 4-2-1 on the season.

What a difference a year makes for Pierre-Luc Dubois who scored the opening goal of the game and had the game-winning goal:

Winger Kyle Connor continues to look like he has elevated an already impressive game to the next level picking up three assists in the win which gives him 13 points (6G 7A) in seven games for Winnipeg.

Speaking of guys from Michigan Andrew Copp had another solid game scoring his fifth goal of the season in his seventh game.

Goalie Eric Comrie had a great game in his season debut making 29 saves for the Jets as he picks up the win for Winnipeg over the Kings. His last regular season win in a Jets uniform was March 20th, 2018 against these same Kings.

Connor 3A
Dubois 2G
Pionk 2A

The Jets are practicing tomorrow in L.A. as they get ready to face the Sharks on Saturday night. The Morning Papers which will go live at 7 am on illegalcurve.com.