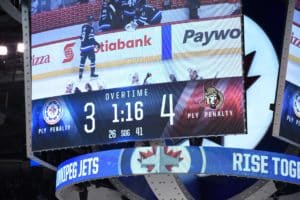 The Jets comeback fell short as Ryan Dzingel won it for Ottawa in OT and they fall to 36-19-4 on the season.

– Who else but (trade target and Winnipegger) Mark Stone opened the scoring on the PP;
– Brandon Tanev came back shorthanded to tie the game;
– Tyler Myers gave the Jets a 2-1 lead with their second shorthanded goal of the period;
– Sixth goal of the season for Myers coming in Game 57 for him (last season he had six in 82);
– Lots of “We want Stone” chants from the Winnipeg crowd.
– Sens score another power play goal (Rudolfs Balcers) to tie the game;
– Seconds later Ben Chiarot appeared to give the Jets a 3-2 lead but it was called back (offside);
– Sens scored a third PP goal courtesy of Matt Duchene in the 3rd to take a 3-2 lead on a 5 on 3 opportunity;
– Just after a Jets PP had expired Tyler Myers scored his second of the game to tie it up;
– Blake Wheeler came close to ending it in very similar fashion to what we saw in Buffalo but Anders Nilsson made an unbelievable stop;
– OT produced chances for both sides but in the end Ryan Dzingel wins it for the Senators.

Via NHL PR we learn that the two Jets shorthanded goals “came 2:37 apart, the fastest two such goals ever by the club”.

As well, as per Jamie Thomas of Jets TV, this was the first multi goal game for Tyler Myers as a member of the Winnipeg Jets.  Last time he had two goals in a game was back in 2014.

Coach Maurice:  On the start to the game.  Did he see discipline being an issue for his group today?  What is his level of concern with their D zone play?  What did he see from the five-man gap?  What is the level of concern with the club with the way things have gone over the last week?  Reason for recall with Poolman?  What are his specific concerns with the team?  Has he noticed if the opposition is playing their power play differently?

The Jets are off on Sunday.  You can still start your day with the AM Jets papers which go live at 7 am on illegalcurve.com.