Game 5 of the pre-season post-game recap: Jets 5 Flames 4 in OT 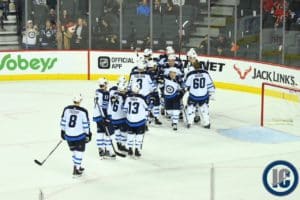 The Jets night in Calgary didn’t get off to the greatest start as they were down 2-0 after the Flames scored two goals in less than a 1:19.  But the Jets scored four straight to take control of the contest.  Or so it appeared because for the second time in the game the Flames scored twice in 1:19 to tie the game.   However Nikolaj Ehlers decided to double his goal total for the game as he blasted home the OT winner to give the Jets their first road win which improved their overall pre-season record to 4-1.

– Sami Niku had himself quite the night ripping home two goals;
– Nikolaj Ehlers scored his first goal since game 80 of last season and then added a second for good measure;
– C.J. Suess, who has been making a good impression in camp, scored his first of the pre-season;
– Jacob Trouba had two assists.

For a look at the advanced stats from tonight’s game check it out here.

Coach Maurice:  On Nikolaj Ehlers game.  When did the game feel comfortable for him?  Niku’s offensive game but his desire to play better.  What has allowed CJ Suess to look so comfortable for a rookie?

The Jets are back on the ice on Tuesday to continue training camp.  Then they play the Wild in Minnesota on Wednesday and conclude their game schedule with the Devils on Thursday in Winnipeg.