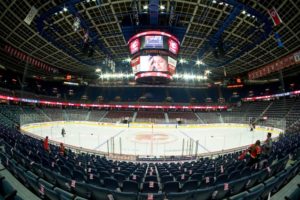 It was a rather ho-hum first 40 minutes and but for a lapse of 30+ seconds it may have ended tied at zero but the Flames took advantage of opportunities to put two past Eric Comrie (made 18 saves on 20 shots).  More concerning is Josh Morrissey played his last shift of the game with 5:50 left in the middle frame although it wasn’t readily apparent what caused him to miss the 3rd period.  Mikhail Berdin played the final 20 minutes as he got his first taste of NHL action making 13 saves on 13 shots. And folks who are maybe not too familiar with the Birdman got a taste of what we see regularly in the AHL.

Coach Maurice:  Update on Josh Morrissey?  How did it happen?  What did he think of his young team tonight? Did he like what he saw from Gabriel Bourque?  Why was it important to get Berdin into the game in the 3rd period? On getting Anthony Bitetto into big minutes.  On the play of Josh Morrissey.  What is the message to the guys getting sent to the Moose?  Does he mention the Kyle Connor example for guys going down to the AHL?  Hard lesson in seeing the value?

Coach Maurice indicated that Morrissey was pulled as a precautionary move.  “He was tightening up and we didn’t want to get to the point that we were worried about him so he got pulled early.”  Added that it wasn’t a result of a blocked shot.

The Jets back on the ice for practice on Wednesday as training camp continues and will play their final home exhibition game on Thursday night against the Oilers.  You can probably expect a big round of training camp cuts on Wednesday as well.  Kick start your day with the AM Jets papers which go live at 7 am on illegalcurve.com.