A look at the game 33 projected lineups and audio. 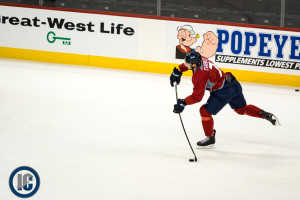 Courtesy of Ken Wiebe of the Winnipeg Sun we get these projected lines, D pairs and starting goalie from the morning skate:

Blake Wheeler:  What does he expect from his team tonight?  What kind of opportunity a spread out schedule will mean for the Jets?  What can practice do for the young players?  Was the break as important mentally as it was physically?  On going to the Children’s Hospital yesterday.

Drew Stafford:  What will it mean to this team to have a few days off?  Will it take some time to get back up to game speed?  Preparation as a group for the Panthers.  Still fun playing against a guy as old as Jagr?

Paul Maurice:  Update on Nic Petan.  Would he consider a return of Petan to the AHL on a conditioning stint?  What does he remember from the first time his team faced Jaromir Jagr?  On preparing his club to face the Panthers.  What’s it like to see Jagr still performing at such a high level?  Can he measure the physical/mental benefit from this short break?

Panthers lines, D pairs and starting goalie are now up to date as well: