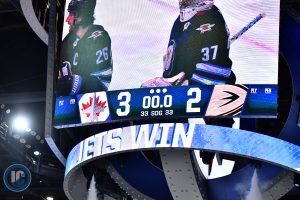 The Jets add another important couple of points to the standings bank thanks to their 3-2 win over the Ducks this afternoon. They improve to 18-10-2 on the season.

Coach Maurice:  Did Nikolaj Ehlers take “stay in the fight” a little too literally?  Assessment of the game.  On Copp being hauled down and the lack of a penalty shot.  Is he happy with the power play?  What did he see from Nick Shore in his Jets debut?  What is the biggest challenge for Shore?  More on Ehlers fight.  On the Ducks stretching things out and the D having to track back.  On a team that elevates its game as the game progresses.

The Jets will likely practice on Monday although the team hasn’t released their scheduled yet for this week.  You can kick start your day with the Morning Papers which go live tomorrow at 7 am on illegalcurve.com.