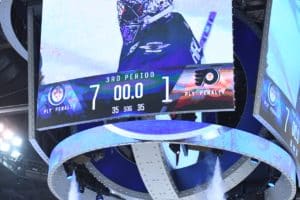 Connor Hellebuyck was excellent in the opening frame and the Jets took over the 2nd and 3rd periods to beat the Flyers 7-1 this afternoon which improves them to 18-9-2 on the season. Fans went home happy from this one.

– The Flyers, despite having played yesterday, were flying to start this contest;
– They held a 10-1 shot edge but the strong play of Connor Hellebuyck kept it tied at zero;
– Kyle Connor (on his 22nd bday) opened the scoring in the 1st;
– Josh Morrissey returned to the lineup and blasted home a power play goal to make it 2-0;
– The Flyers were able to get one back before the opening frame concluded;
– Philly held a 17-6 shot edge after 20 minutes.
– The middle frame saw the Jets really start to pressure the Flyers (including 10 straight shots);
– Brandon Tanev put home a Josh Morrissey rebound to give the Jets a 3-1 lead;
– Flyers swapped goalies after the third Winnipeg goalie changing Neuvirth for Stolarz;
– Didn’t help as Dustin Byfuglien skipped a shot past the new tender to make it a 4-1 lead;
– Blake Wheeler scored shorthanded to make it 5-1 after 40 minutes;
– Rough stuff to end the middle frame after Robert Hagg hit Kyle Connor from behind into the boards;
– Jets had almost 3 minutes of PP time on Hagg’s major and Bryan Little made it 6-1;
– Tyler Myers finished off the goal scoring burying his chance to make it 7-1.

Coach Maurice:  Thoughts on Connor Hellebuyck to start the game.  What did he see from the final 40 minutes?  Did he expect the Flyers to come out that way?  On the third goal by Brandon Tanev.  Thoughts on the play of Josh Morrissey?  Anything on Mathieu Perreault?  What are his thoughts on the Hagg hit on Kyle Connor?  On Hellebuyck putting pressure on himself.  On Jets players standing up for each other.

Mathieu Perreault was hit at the Flyers blueline and remained down and once he did get up went right to the Jets dressing room.  Following the game coach Maurice indicated the veteran forward was “handing out the sticks for the Three Star selection so I think he’s fine.”

The Jets are scheduled to practice on Monday at 11 am at Bell MTS Place.  Get your day started with the morning papers at 7 am on illegalcurve.com.