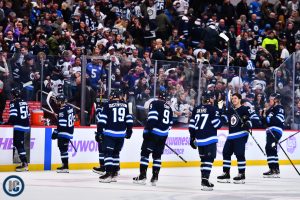 That may go down as one of the wildest games we’ve ever seen here at Bell MTS Place. Jets come back to beat the Jackets 4-3 and improve to 14-9-1 on the season.

– Blake Wheeler had 1G 1A which gives him 600 as a member of the Jets;
– Andrew Copp had 1G 1A including the game winning goal;
– Neal Pionk played 24:51 which led the team;
– Nikolaj Ehlers continues to lead Jets in goals (11);
– Ehlers has scored four times in last five games;
– Connor Hellebuyck with the five save win.

Coach Maurice:  What does he make of that game?  How big was Perreault’s goal?  Update on Josh Morrissey and Nathan Beaulieu?  Was there any scenario where he’d consider putting Brossoit back in?  What can he say about the way his four D played in the 3rd?  What goes through his mind when he sees Merzlikins gave up the puck late?  Did he see Blake Wheeler try to “take over some shifts”?  On his exchange with Brossoit.  Grey Cup talk.

The Jets are off tomorrow but will hit the ice on Monday for their skills competition.  You can kick start your Sunday with the Morning Papers which go live at 7 am on illegalcurve.com.