A look at the game 19 projected lineup along with pre-game audio. 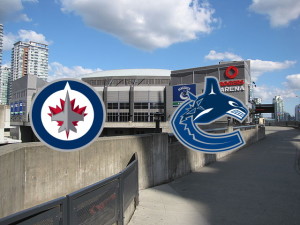 The Jets kick off their four-game road trip in Vancouver as they take on a Canucks team that has dropped their last four games.  Following yesterday’s practice coach Maurice indicated that he anticipated using the same lineup tonight against Vancouver as he had last game against Buffalo.  While he didn’t specifically mention it, it seems reasonable to assume he meant the same with the exception of Connor Hellebuyck getting the start.

Mitchell Clinton of Jets TV confirms that the Jets bench boss is going with the same group today at morning skate as he used yesterday in practice.

Coach Maurice:  What does he expect from the Canucks squad?  The challenges of playing on the road.  Having games in hand.  How much does he know about Elias Pettersson?  The confidence of young players in the NHL.  On Kyle Connor being a driver on the 2nd line.  Benefit of balance vs having Connor with Wheeler and Scheifele.  On the efficiency of the Jets power play.

Puck drop is at 9:00 PM.  Be sure to head over to illegalcurve.com following the game for a recap of the action which includes post-game audio from the Jets room as well as from coach Maurice.