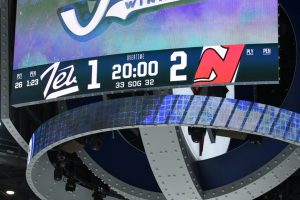 The Jets win streak ends but the points streak continues after tonight’s shootout loss which drops them to 8-7-1 on the season.  It was a snoozer for the most part and these two squads even managed to make OT unexciting.

– Andrew Copp snapped a nine-game goalless skid;
– Bryan Little took a Nikolaj Ehlers slap shot to the head which forced the veteran centre to leave in the 3rd.

Coach Maurice:  On the game being sluggish.  Any update on Bryan Little?  Where did the puck hit him?  What did he think of Nathan Beaulieu’s regular season debut?  When is the right time to go three forwards in OT?  Going back to Kulikov.  On Scheifele/Wheeler line being outshot 5 on 5.

No update from Jets coach Paul Maurice with respect to Bryan Little.  He simply said “he’s being checked out”.

The Jets are off tomorrow but will return to the ice on Thursday for practice as they get ready to face the red-hot Vancouver Canucks.  You can kick start your Wednesday with the AM Jets papers which go live at 7 am on illegalcurve.com.

LeBrun: Jets want Byfuglien back now; but let’s see how everyone feels at the end of this process
Winnipeg Jets Morning Papers