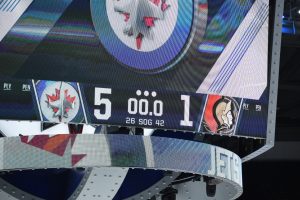 Mason Appleton has now tied his points total from last season in 33 fewer games. And he sits just two back of his career high for the AHL’s outstanding rookie back in 2017-18.

It looks like Dylan DeMelo had scored his first goal as a member of the Jets which would have been his first goal since March of 2019 but the goal was changed after the game and was credited to Nikolaj Ehlers for his team leading ninth goal of the season.

With his goal in the 2nd period Blake Wheeler moved into sole possession of 2nd spot for the Jets/Thrashers franchise leader in goals scored with his 218th, one past Bryan Little.

Since they switched the Jets second goal to Nikolaj Ehlers, it means he has scored his 23rd career game winner which moves him into sole possession of 6th all-time for the franchise.

Mark Scheifele quietly up to 17 points (5G 12A) in 13 games this season. He is tied for sixth in the NHL points race.

Nikolaj Ehlers just one behind with 16 pts (9G 7A). Is the Jets goal scoring leader (Ties him for 2nd overall in NHL goal scoring with four others).

Connor Hellebuyck made 41 saves in that win.

1. What did he see from Tucker Poolman’s 15 minutes tonight?
2. Thoughts on the 11/7 configuration.
3. What has made the Jets the better of the two teams late in these games?
4. Moving Paul Stastny to the wing.
5. Zone exit struggles.
6. Thoughts on Neal Pionk’s game this season

The Jets will practice tomorrow in Winnipeg as they get set to conclude this two-game series with the Senators on Saturday afternoon. The Morning Papers will go live on Friday at 7 am on illegalcurve.com.