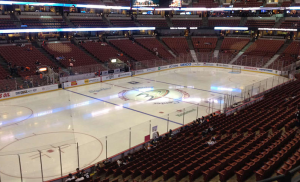 A pretty good opening period for Winnipeg which saw them take a 2-1 lead on goals by Ehlers and Wheeler despite being outshot 13-9 by the Ducks.  Ehlers goal came just 55 seconds into the opening frame.

The 2nd was anything but normal as the Ducks scored four times on nine shots while the Jets could only score once.  Connor Hellebuyck was pulled in favour of Laurent Brossoit.  Shots were reversed that period with Winnipeg having a 13-9 edge but found themselves down 5-3.

Bryan Little scored after Nikolaj Ehlers made a nice defensive play in the neutral zone.  Winnipeg attempted to tie it up but the Ducks would get another as Rowney scored on a breakaway to make it 6-4.  Anaheim would add an empty net goal to make it a 7-4 final.

– That was Connor Hellebuyck’s first regulation loss to the Ducks as he was 5-0-1 coming into the game;
– Blake Wheeler had gone 7 games without a goal and 6 without a point before his goal tonight;
– Bryan Little has 2G 1A in his first 2 games of the season including back to back games with a goal;
– Nikolaj Ehlers scored goals 5 & 6 in game 13, last year he scored his 6th goal in game 24;
– Nikolaj Ehlers finished with 2G 1A and is tied with Scheifele & Laine for team lead.

Coach Maurice:  Assessing the game and specifically the 2nd period.  Are guys cheating for offence?  On the fifth goal against.  Does having seven D contribute to the confusion?  First impression of Sbisa?  On Kyle Connor having nine shots.  On Blake Wheeler.  More on Kyle Connor.

The Jets have a day off on Wednesday.  They’ve got a practice scheduled for Thursday in San Jose..  Kick start your day tomorrow with the AM Jets papers which go live at 7 am on illegalcurve.com.