A look at the game 12 projected lineups and pre-game interviews.

The Jets have been off since last Thursday when they played and defeated these same Flames 4-1 in Winnipeg.  Since that time the Flames returned home and defeated the Oilers on Saturday night in Calgary.  Tonight will be the fourth straight game against the Flames for the Jets as they hold a 2-0-1 record during this mini series and dating back to the season opener currently have gone 3-0-1 against the former Smythe Division rival. 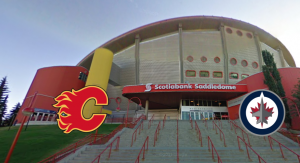 Jansen Harkins, who is dealing with a lower-body injury which was labelled by his coach as slightly beyond day-to-day, was put on IR.  The team added the newest member of the club to the active roster as Pierre-Luc Dubois will play his first game as a member of the Jets.  And from the taxi squad both Kristian Vesalainen (playing tnt) and David Gustafsson (not playing tonight) will return to the active roster.

A look at how Calgary is expected to roll via Pat Steinberg of the Fan 590.

1. What will he be looking for in Pierre-Luc Dubois game?
2. What has stood out about the mini series vs Flames?
3. Is he paying attention as much to any of the other 3 divisions?
4. What impact does a new player have on the rest of the team?
5. Coaching younger players.
6. The opportunity for Kristian Vesalainen.

With Pierre-Luc Dubois are the Winnipeg Jets the deepest team in Canada?
Winnipeg Jets Transaction Report: Four moves made ahead of game against Flames