From the archives: Interview with Bobby Clarke

Last night the news broke that Shea Weber had agreed to a 14-year, $110 million offer sheet with the Philadelphia Flyers. 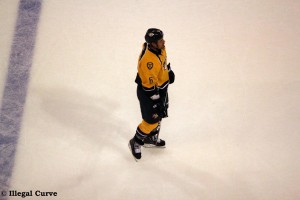 This wasn’t the first time the Flyers had offered a player an offer sheet, as back in 2006, the Flyers tried to pry Ryan Kesler from the Vancouver Canucks with a one year $1.9 million offer sheet (which seems pretty minor today).

Back on April 1, 2009, when the Illegal Curve Hockey Show was only three months old, Philadelphia Flyers executive Bobby Clarke came on the show to discuss a number of topics, among them offer sheets and the usage thereof.

Here is a transcript of that interview (click here to listen):

IC: “A couple years ago you got a lot of flack for tendering Ryan Kesler to an offer sheet, he’s obviously turned into a terrific player. What did you see in him that made you make that offer, did you think of the criticism?

Bobby Clarke: “We ended up getting in a jam near the end of August, all of a sudden Keith Primeau had to retire due to head injuries, Forsberg was hurt and couldn’t play, and our next two centremen were Carter and Richards. We were trying to break them in as third and fourth centremen behind Primeau and Forsberg, and would have been real good down the middle. You lose your top two guys, so we were trying to get another centremen and we had seen a lot of Kesler. Paul Holmgren who was my assistant at the time; he had had him at the world championships and, hearing out of Vancouver was that they didn’t want to pay him, we said the rules are the rules, we’ll follow them, we’ll take a shot at him. We were willing to give up the compensation for him. We liked him, we thought he could do for us what Primeau had done.”

IC: “At the time Dave Nonis was pretty angry and some media outlets and other hockey people were critical of you. It was within the rules, but what was your reaction to that, in terms of them going at you for something that seems like it was good foresight when making that decision.”

Bobby Clarke: “If you’re going to manage in the NHL you’re going to get criticism, it rolls off your back after a while. I didn’t make the rules, if they were mad at somebody who made the rules, then get mad at them, don’t get mad at me for using the rules. If you’re a general manger, it’s your responsibility to your own club to use those rules. If they put the rules in and you don’t use them, what’s the point of putting them in.”

IC: “That’s right, I mean Kevin Lowe got criticized by Brian Burke for the same kind of thing, even though he was playing in the rules. Burke thought Penner was overpriced, and then he didn’t match. It seems even stemming from the offer sheets way back to Mattias Ohlund that GM’s get criticized within the fraternity for playing within the rules. It seems kind of two sided to me.”

Bobby Clarke: “It’s what causes the league problems, if they put rules in, and nobody uses them, what do you think the players association thinks? That they’ve collectively bargained a dumb rule? If the rules are there they expect the people in charge to use them. If you don’t use them, the players association will change things to favor the players (and they rightfully should).”

The Illegal Curve Hockey Show airs at a special time this summer, Saturdays from 9am to 11am on TSN Radio 1290.