Friday News You Can Use: Latest on Return of the NHL to Winnipeg

Macleans:  In conversation with Gary Bettman.  We agree with Commish Bettman on this point;

To be able to return under different circumstances, where the franchise can be successful, it’s nice to be part of a corrective situation.

Atlanta Journal Constitution:  Ramsay could meet with True North this weekend.  Looks like just the Devils and the Whatevers are left looking for a new coach.  If Ramsay’s services aren’t retained here, there was word yesterday that New Jersey might be interested.

Winnipeg Free Press: Ten Minutes from Owning the Coyotes.   While everyone in Winnipeg would certainly appreciate the symmetry in getting the original franchise back, I’m quite happy that we got the young, up and coming team, and not the team filled with aging veterans on the downside of their career.

Winnipeg Free Press: Corporate Money Begins to Flow.  MTS Centre is the first to re-up with True North Sports & Entertainment, but I expect significant announcements similar to this one to take place all summer long.

Winnipeg Free Press: Haviland next up in Coaching Search. The most interesting news to come from the coaching search yesterday is that Craig MacTavish did not get the Minnesota Wild job that he was rumoured to be in line for. Join us tomorrow morning on The IllegalCurve Hockey Show when we dedicate the majority of the program to analysing True North’s different coaching candidates.

Winnipeg Sun: Kirk Muller not on TNSE Radar.  The Winnipeg Sun reports that Kirk Muller will not be interviewed by Kevin Cheveldayoff for the head coaching position. The knock on Muller is that he doesn’t interview well. It doesn’t appear that it even came to that in this instance, but Muller continues to wait for his shot at being the head honcho.

Toronto Star:  Why a soaring loonie could bring the cup back to Canada.  Canadian teams went to the Cup finals in 2004, 2006, 2007 & 2011.  That isn’t exactly terrible considering there were only 6 Canadian teams compared to 24 US teams.  More than the loonie’s strength, perhaps karma was in play, such that there wouldn’t be a Canadian Cup winner until the NHL returned to Winnipeg.

More articles, today’s Picture/Video of the Day after the jump.

Winnipeg Free Press: Winnipeg Whatevers Unlikely to Buy-Out Players.  Now that the season has come to an end, we are in the annual two week portion where buy-outs may occur, and qualifying offers are made to keep RFA’s with the franchise. Shouldn’t be too much news  on either account, as Tim Campbell reports in the article above.

Winnipeg Sun:  ‘Peggers say NHL riot could happen here.  The reality is the morons who rioted aren’t fans, they’re morons.  There were reports that some had face masks.  Why would you bring a face mask to participate in the fun of Game 7, if not to start trouble?  Could it happen here, yes, but I seriously doubt it and as the one fan suggested, we have a long way to go before we need to worry about that.

ESPN:  NHL still has issues.  Can always count on Burnside to give Winnipeg a nice plug.

How this move makes the NHL stronger in the long haul remains to be seen, given that Winnipeg is now the smallest market in the NHL and will almost certainly replace Edmonton as the least attractive destination for free agents.

TSN:  Wild to name Yeo as new head coach.  Looks like MacT is still available if True North wants him as Minny appears to be going in a different direction.

IC Radio Preview: Tomorrow on The Illegal Curve Hockey Show we will devote the majority of the show to analyzing the different coaching candidates being interviewed by Winnipeg Whatevers General Manager Kevin Cheveldayoff.  Stay tuned to the site for a more detailed preview this afternoon.

Picture of the Day – Another day another Jets logo: 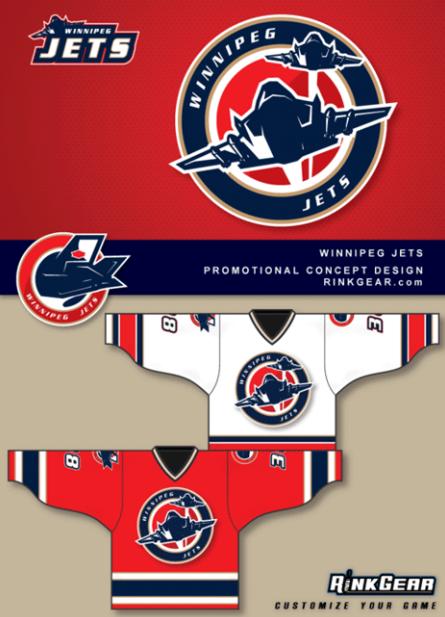 Thursday’s (6/15) News you can use: Latest on Return of the NHL to Winnipeg
Monday Afternoon Links