Five defencemen the Winnipeg Jets could target in Free Agency

Ezra looks at five defencemen the Jets could target

With just hours to go until July 1st and NHL Free Agency, here are five players the Winnipeg Jets could target tomorrow.

1. Patrick Wiercioch. Wiercioch was recently not qualified by the Ottawa Senators and became an unrestricted free agent. Wiercioch, 25, has played 211 career regular season games in the NHL, has good size and can move the puck. But most importantly, he’s a left shot defenceman which is exactly what the Jets need. Also, Wiercioch would not cost a lot of money ($1-2 million per year?). Wiercioch had five assists in 52 games this past season which was not good but back in 2013’14 he had a career high 23 points in 53 games.

2. Kyle Quincey. Quincey, 30, is also a left shot defenceman and an unrestricted free agent. Quincey played the last five seasons for the Detroit Red Wings and has played in 495 career regular season games. Quincey is a more physical defenceman than Wiercioch but he can also chip in offensively (11 points in 47 regular seasons games last season). Quincey could be a good #5 or #6 defenceman on the left side for the Jets and wouldn’t cost much. Quincey can play with skilled players.

3. David Schlemko. Schlemko, 29, had six goals and 13 assists in 67 games this past season with the New Jersey Devils so it was somewhat surprising that he was not re-signed. Schlemko is not a very physical defenceman but he has the ability to chip in offensively and played on the Devils 2nd Power Play unit last season. Schlemko’s decision making has been questioned at times but the fact remains he is a servicable left side defenceman who wouldn’t cost much. 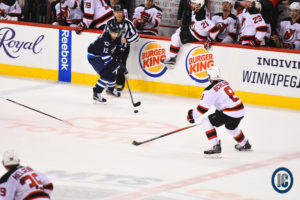 4. Dennis Seidenberg. Seidenberg was recently bought out by the Boston Bruins and is now an unrestricted free agent. Seidenberg, 34, is not as good as he once was but he could still be a good third pairing left shot defenceman for the Jets. There are concerns with Seidenberg’s health and he has slowed down substantially but if the Jets could sign him for a reasonable cap hit, their depth would improve considerably. Seidenberg could be looking for $3-4 million per year which would be too much of an asking price for the Jets.

5. Klas Dahlbeck. Dahlbeck, 24, was part of the trade in 2015 that sent Antoine Vermette to the Chicago Blackhawks from the Arizona Coyotes prior to the NHL Trade Deadline. The Swedish defenceman has good size and is a strong skater but he only had two goals and six assists in 71 games for the Coyotes last season so he was not qualified, making him an unrestricted free agent. Dahlbeck does not have a high upside but he would be cheap and could be a decent depth defenceman for the Jets. And yes he shoots left.