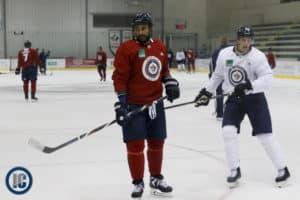 The Jets are back on the ice for the final skate before the regular season kicks off tomorrow.  They are scheduled to practice again in Winnipeg on Wednesday before they leave to kick off the season with a two-game Central Division road trip starting in St. Louis on Thursday night.

They have to get down to 23 by 4 pm CST today and they made their first move towards roster reduction this morning when they re-assigned Logan Stanley to the Moose taking them to 25 players on the roster.  The expectation is that Nic Petan will be placed on the equivalent of a bereavement list as a result of his father’s passing which means they will have one final move to make.

For now practice begins with 24 players on the roster and 23 on the ice according to Brian Munz of TSN 1290 Winnipeg:

Coach Maurice:  On the camp that Logan Stanley had.  On the further roster moves.  Will any players start on IR?  Anything new on the Petan situation?  Does he like the attitude of the squad?  On the bubble players.  Having four lines and internal competition.  Has his philosophy altered on development because of the suchess of Scheifele, Ehlers, Laine?   What would he like to see Patrik Laine improve on this season?

The Jets re-assigned Tucker Poolman and designated Nic Petan as a non-roster player to get down to the 23-man roster.

The Jets are scheduled to practice at the IcePlex on Wednesday and will thereafter depart for St. Louis to kick off the 2018-19 season against the Blues on Thursday.