Stevie from NYC checking back in with another post.  This time he headed on down to the NHL store to look for some Winnipeg Jets gear.

If I recall my Grade 8 English class correctly, Shakespeare’s Juliet once opined that  “A rose by any other name would smell as sweet”.  Now I’m not a botanist so that might very well be true of flowers, but when it comes to naming Winnipeg’s new NHL team, it appears many local hockey fans would beg to differ with Ms. Capulet.  People are attached to the “Jets” name and everything that comes with it, from the memories to the players to, perhaps most of all, the merchandise.  With the latter in mind, I ventured down to the NHL flagship store in Midtown Manhattan to ask find out whether everything Jets related was flying off the racks. 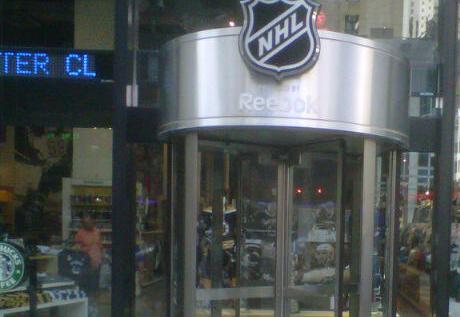 Upon walking into the store (which, not surprisingly, is prominently displaying Canucks and Bruins gear) I was greeted by a nice young woman. I asked her whether she had noticed an uptick in customers asking about Jets merchandise and she replied with this bombshell:

“Actually, people have been coming in and buying Atlanta Thrashers stuff.”  After a brief pause to determine whether she was (a) joking or (b) Gary Bettman in a wig (she was, to the best of my knowledge, neither) I pressed her on this claim and she explained that “Two people came in and bought jerseys, pucks and hats”.

To read about the rest of this encounter and to see some of the Jets memorabilia, select read more.

She couldn’t recall their names but I did notice a signed receipt at the register signed by one “Mr. Balkan.”  All kidding aside, there definitely was a lot of Thrashers gear in the store, and while I volunteered to – for the sake of historical accuracy –  help them move it all to “Vintage” section, they respectfully declined.

The employee then explained that the main reason they weren’t selling Jets gear was that there simply wasn’t any.  While the store was more than adequately stocked with Nordiques and Whalers paraphanelia (not surprising given Hartford’s proximity to NYC), she said that “We don’t have much Jets stuff to sell.  I know we used to have a kids jersey but that’s it.”  I knew this wasn’t entirely true since I once spent close to an hour in the store deciding whether or not to purchase a Happy Gilmore inspired hockey stick golf putter with the Jets insignia on it, so I decided to explore for a few minutes….and was rewarded.   In one nook I stumbled upon a neatly stacked row of Jets pucks.  I didn’t buy one of these since I already have an identical one (purchased in the mid-80s at the merchandise stand in the basement of the Winnipeg Arena) which sits on my office desk as a paperweight.

And that was all.

On the way out I stumbled upon something that made me do a double-take: this Phoenix Coyotes commerative badge proclaiming “10 Years in The Desert”.  I asked the staff whether one of these had ever been purchased, and while they couldn’t recall anyone specifically buying it, rumour has it that Glendale Mayor Elaine Scruggs once came into the store during a visit to New York and attempted to purchase one with her government credit card (the transaction was declined due to insufficient funds). 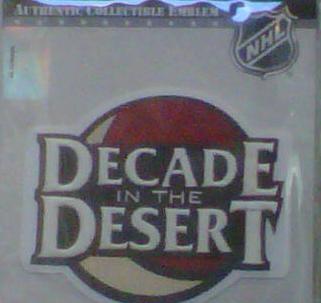 On the bright side for Winnipegers who may be visiting the Big Apple in the near future (and there may be many, as our team will be making six trips next year to the city to take on each of the Rangers, Devils and Isles twice), the NHL store employee did say these encouraging words about Jets merchandise: “More will be coming.”  Now if only the TNSE ticket box office would say the same thing….