Kane confirms that he had requested a trade from Winnipeg in the past. 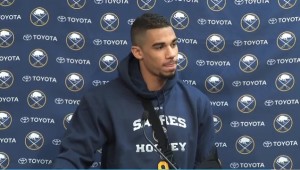 While there had been plenty of speculation about whether Evander Kane had ever requested a trade request out of Winnipeg it had never been officially confirmed.  In fact these trade request rumours dated back all the way to 2012.

Today in his first presser with the Buffalo media Evander Kane confirmed that “I had asked for a trade in the past”.  Official confirmation of something that many had speculated about for years.  The closest we had previously come to official confirmation was Kane’s agent Craig Oster telling Tim Campbell of the Winnipeg Free Press on February 6th, 2015 that “It’s something that Kevin (Cheveldayoff) and Evander have addressed multiple times in the past several years, and I’ll leave it at that”.

Of course we don’t know the time frame on the request so he could have been referring to something that occurred following the game when he was scratched against his hometown Vancouver Canucks on February 3rd, 2015.  Or it could have been years ago.  We will likely never know.

You can listen to his entire presser with the Buffalo media here.