On Saturday’s Illegal Curve Hockey Show, the first hour of the show was spent analyzing the week in trades leading up to the deadline. To listen to the show, subscribe to the podcast on iTunes here, RSS users can subscribe here. To download the mp3 directly or to listen on our website, the post is here. 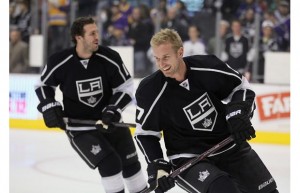 The following analysis was taken from the show.

Tale of the tape:

This is a trade that must be looked at through two different perspectives. The first is looking at the trade as a single trade. The second view is to look at it on a whole, meaning, Columbus effectively traded Jakub Voracek and the 8th overall pick (Sean Couturier).

Off the ice, the reasons for trading Carter were about his contract, and his character, says Illegal Curve Hockey Show analyst Richard Pollock:

“I don’t think Columbus did as badly as I thought they would have, because there was no market for Jeff Carter. It was restricted by the fact he has ten years left on his deal, which restricted him to a couple of teams, and other teams were concerned about his character.”

“The market for him was very small, the fact they were able to get the first round pick, and Jack Johnson, who’s game I have concerns about, but does have potential, was fine work by GM Scott Howson on an evaluation of just this trade. If they can nail the draft pick, they can make it look like an all around good deal.”

“Jeff Carter is a good skater, a good stickhandler, he’s got a terrific shot, he can distribute the puck, but he’s not great at it. He’s good defensively, he can play in all situations, he’s an all around really good player.”

Pollock continued on Jack Johnson saying, “he’s as good of a skater as Zach Bogosian, good slapshot, good offensive talent, can join the rush. His hockey sense and defensive awareness leave much to be desired.”

In terms of contracts, Johnson’s is more favourable to Carter’s, as it is for less years and money, he is also younger, and defenseman tend to peak at a later age.

Pollock was not in favour of the deal overall, and would not pick a winner. It was a move of desperation for both teams.

Columbus receives: 2nd round pick in 2012, conditional 5th in 2013 and Curtis McElhinney

Off the ice: It is interesting to note that this is a salary dump by Columbus, who is assuredly losing money this season, to the NHL owned Phoenix Coyotes.

Antoine Vermette is a limited player offensively, he skates well, and can handle the puck, but is not a point producer (27 points in 62 games this season). Vermette is a player who is better defensively than offensively.

Columbus is shedding a bad contract, at $3.75 million with three years remaining is a lot for a guy who is not a point producer. The value that they are receiving in this deal is in the 2nd round pick, as well as the removal of his contract on the salary cap. The Blue Jackets can fill the hole left by Vermette with players such as RJ Umberger, Derick Brassard and the return they get for Rick Nash (assuming he is traded before next season).

Curtis McElhinney is a throw in, a back up goalie who’s been injured all year. He is not the answer for Columbus’ goaltending situation.

From a Phoenix perspective, they are getting a player who fits well into their system. Phoenix loads up on veterans who buy into their boring trap style system. Vermette’s speed can create pressure on the opposition and he can play in all situations. He is a “tweener” a 2nd or 3rd line player, and on the Coyotes squad he will play a bigger role. He fits the veteran defensively responsible type player that coach Dave Tippett wants.

This is a good move for both teams.

Minnesota Receives: Kurtis Foster, Nick Palmieri, Stephane Veilleux, a 2nd round pick In 2012, a conditional 3rd round pick in 2013 (if New Jersey makes the conference finals this season or next).

New Jersey is filling a need by getting an offensively talented defenseman who can skate and move the puck. From watching New Jersey this season, it is easy to tell they are missing an offensive defenseman. Players such as Anton Volchenkov, Henrik Tallinder and Bryce Salvador are defensive types who can block shots and hit. They did not have a guy with the ability to lead the power play and move the puck out of the defensive zone well enough.

Zidlicky should have no problem fitting into the dressing room with fellow countrymen Petr Sykora and Patrik Elias. He’s signed for next season at $4 million, which is a lot, but offensive defenseman like Zidlicky don’t grow on trees.

Minnesota was in a situation where they were not playing Zidlicky, and he fell out of favor with Coach Mike Yeo.  They receive ex-Wild Kurtis Foster who’s contract comes off the books next season, he is a big body who can chip in with his point shot.

Stephane Veilleux , also an ex-Wild is 13th forward and his contract expires after the season.

Nick Palmieri has the potential to be a 3rd or 4th line player for Minnesota.

Comparing the deal to the Hal Gill deal, the Predators gave up a 2nd round pick and Blake Geoffrion for Hal Gill. Because the Foster and Veilleux contracts expire at the end of the season, the Devils gave up Nick Palmieri and a 2nd round pick. If they do reach the conference finals, they will be happy to relinquish the 3rd round pick.

This is an even trade for both teams.

While this was two separate trades by Tampa Bay GM Steve Yzerman, it should be looked at as one move.

The trades Yzerman has made leading up to the deadline show that the former Detroit Red Wing is ascending up the ranks as one of the top GMs in the NHL.  He is aware that his team is not a Stanley Cup Contender this season and is selling off assets in order to build for the future. As of February 26, 2012, Tampa Bay now has six picks in the first two rounds of the 2012 draft.  The net result of this trade is that Tampa Bay receives Detroit’s first round pick in exchange for Steve Downie.

Detroit adds depth to their defense in Kyle Quincey. Quincey who was drafted by Detroit in 2003 is a player who skate well, can move the puck, but isn’t the most physical. He is brought in to play the 3rd defense pairing with Jonathan Ericsson, which should take some pressure off of rookie Jakub Kindl. He  fits into Detroit’s system,  and will be an RFA after this season so they will be able to retain him.

Colorado receives Steve Downie who gives their team some much added toughness. He’s a player who can get in your face, go to the net, hit, and move around in the lineup. While he doesn’t have great hands, he can provide 10-15 goals and 30-35 points. Ideally, he’s a 3rd line right winger. Downey will be an RFA after this season.

A reasonable deal for all sides.

This is a depth acquisition by Philadelphia, which may not have been completely necessary, but he is a big body who fits in well with the Flyers team.

Steve Yzerman is stockpiling picks and building for the future.

The bottom line: An even deal.

Jerrod Smithson is a 4th line centre who is better than incumbent John Madden. He is a depth acquisition, whose skill lies in winning draws, playing a defensively responsible and killing penalties. Smithson won’t be counted on to provide offense.

Nashville is a well run club and if hey are giving away players for 6th round picks, this means they have no use for Smithson. His $800,000 salary will come off the books for next season, making this a quasi-salary dump. The Predators are looking to make a run for the cup this season, the trade also opens up a roster spot for additional moves.

This isn’t a significant move, that shouldn’t be overrated.

Tune in to TSN 1290 all day on trade deadline Monday for round the clock coverage. Drew Mindell and Richard Pollock of the Illegal Curve Hockey Show will be on from 12pm-4pm breaking down all the trades, as well as previewing the Winnipeg Jets contest against the Edmonton Oilers.