Insight into why Dylan Samberg is heading back to school.

On Saturday’s Illegal Curve Hockey Show on TSN 1290 Winnipeg we spoke with Chris Peters who is an NHL Draft and prospects analyst for ESPN.  At the end of our chat I asked him about Jets 2017 2nd round pick Dylan Samberg who has made the decision to return to college for his junior (third) season as his University of Minnesota-Duluth Bulldogs challenge for a third straight national title. 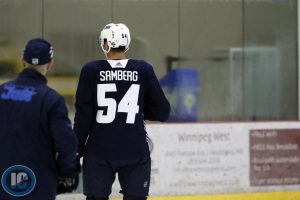 Some Jets fans are worried that Samberg could opt to choose free agency (which wouldn’t be an option until after the conclusion of his senior or fourth college season) on August 15th, 2021.  Chris felt it had more to do with development/ability to jump to the NHL from college and you can listen to his response to my question about Samberg choosing to remain in the NCAA over the NHL/AHL route at this point in his young career.