Newly acquired Winnipeg Jet and Manitoban Eric Fehr was at the packed Jets’ Gear store at the MTS Centre on Saturday Morning and had the following to say regarding the unveiling of the new logo. 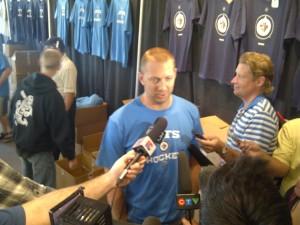 It was love at first sight for Eric Fehr with the new Winnipeg Jets logo.

“I loved it, I knew they wanted to go different than the old logo, t his one works out well.”

“I think it’s a cool design, I like the maple leaf in it, being a Canadian team, having some Jet and plane in it as well, I thought that was cool.”

“I think its great I think that Canadians are proud of the military it’s a great way to represent them on our logo.”

True North kept the identity of the logo so quiet, not even the players knew what it would be.

“I didn’t really know what to expect, so I’m not surprised, it’s a great look and I’m excited to wear it come the season.”

Born in Winkler, Manitoba, Fehr is excited at the opportunity to play in front of his friends and family.

“It’s going to be great, I have a lot of friends and family here I’ve played a lot of years in Manitoba, it’s going to be exciting coming home, playing in front of our fans.”

Having lived in the area, the fan reaction to the logo has not surprised Fehr.

“It’s great, its definitely what we expected, the fans are very passionate, and I’ve seen it throughout the years, and it will get stronger with an NHL team in the city.”

Read more from Eric Fehr after the jump

Like the rest of us, Fehr will have to wait patiently (if that is possible) to see what the new jersey’s will look like.

“I’m going to try to wait as patiently as possible, I’ve been excited about the logo, now I’m waiting to see what the jersey looks like. I think it’ll be a great look.”

“It’s nice to look good out there, I know they’ll do a great job to make sure we’re looking our best out there, and hopefully that’ll help us play our best.”

It appears that the coaching staff hasn’t talked hockey with the players yet, they are still in the process of getting to know each other.

“I haven’t talked hockey with any of the coaching staff, I’ve met a few of a guys and we’ve just talked about the city and different things, nothing hockey related as of yet.”

Fehr on his current shoulder rehab

“Shoulder rehab is going well, it’s right on schedule, just hoping to make it back as soon as possible, I don’t really have a timeline to follow, but I’m excited.”

Fehr feels some responsibility being the “Winnipeg Ambassador” to the team.

“A little bit, a lot of guys have played here in the American League or different times, I think they know what to expect from this city, I know they will enjoy it once they get here, and hopefully we’ll have a lot of fun this year.”

For anyone who grew up in Winnipeg, becoming a Winnipeg Jet is a dream come true.

“It’ s going to feel great, I’ve always wanted to be a Winnipeg Jet, growing up I followed the Winnipeg Jets, it’s really hard to believe there’s a team back here and I can be a part of it this year.”

“Definitely a dream come true, I’ve been following this team since I was a young guy, it’s really hard to believe there’s a team here right now, like I said being traded in the first year, being a part of the logo unveiling and being around when the jerseys are unveiled, it’s really cool.”

While Fehr is excited to be a Winnipeg Jet, it’s not easy being traded.

“Definitely mixed emotions, it’s tough being traded, especially for the first time, it made a lot easier when I found out it was Winnipeg, and I’d be able to come home, spend time with friends and family and play in front of these fans.”

Eric Fehr is active on twitter (@EricFehr) with over 29,000 followers, True North hasn’t given him any restrictions for now.

“I haven’t heard anything from them, I know that my previous team in Washington they were very concerned about what we were going to tweeting. Here, nobody’s approached us yet, I’ll make sure I’m on my best behavior.”

His Reaction to the organization so far

“It’s been great, they’ve been treating everyone well, I’ve been around the dressing room doing my rehab and training, everything’s been great so far.”

Listen to the audio of Eric Fehr speaking to the media