Winnipeg Jets forward Eric Fehr is currently on injured reserve as he rehabs his shoulder. He has been practicing alone with the other injured players (Kenndal McArdle, Ben Maxwell, Aaron Gagnon). Today was the first day he practiced with the team. Fehr donned a red jersey for practice this morning, as he has not yet been cleared for contact.

It is expected that Fehr will be cleared for contact in the next couple of weeks, once he is cleared he will need about two weeks to be ready for a game. (While there currently is no timetable for his return, that is educated speculation) 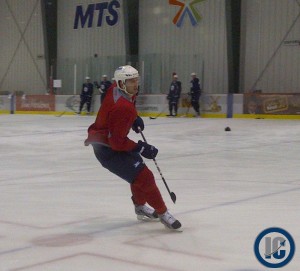 He spoke to the media after his skate:

On his first skate with the team:

“First full practice, it was just an optional, it was more just tryin to get out there with the guys and get a feel for thing.”

On his current progress:

“Everything’s just slow right now, obviously I’m not cleared for contact, but I just want to get an opportunity to play with the guys and see where I measure up.”

On how he measures up:

“I’m used to skating with nobody on the ice, it’s a little bit different when there’s a bunch of them. Definitely rusty, but it felt great to get that first one out of the way.”

“I’ll probably still be skating on my own a lot, I just wanted to get out there and break up the monotony of skating by myself all the time. Just shoot a couple pucks on the goalie for a change, and get a feeling for things.”

On his timetable for return:

“Just taking it day by day, hope to get cleared for contact, in the next couple weeks and we’ll take it form there.”

On how long it will take to get in the lineup, once cleared:

“Conditioning wise I feel great, I feel the best I’ve felt, the strength coach has done a great job of getting me ready for that, but the hands and the timing is something you can’t practice by yourself, it will be a wait and see kind of thing.”

On watching the slow start of the Jets:

On how the Jets can improve:

“Sometimes I think we just need to keep it a bit more simple, just get pucks deep and start to work other teams defense, we’ve got big quick forwards, that going to be something we’re going to need to use.”