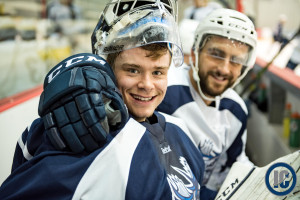 Jets prospect goalie and current number one netminder for their AHL affiliate Manitoba Moose has been nominated to represent the Moose as their Man of the Year nominee.  Last year that nomination went to Josh Morrissey and Eric Comrie is  well deserving of this recognition.

The Manitoba Moose Hockey Club is proud to announce goaltender Eric Comrie has been named the team’s winner of the IOA/American Specialty AHL Man of the Year award for his outstanding contributions to the Winnipeg community during the 2016-17 season.

In just his second year as a professional player, Comrie has become an important ambassador for the Manitoba Moose and American Hockey League in Winnipeg.  Comrie continually displays an incredible dedication to the community and a willingness to give his time away from the rink.

Most notably, Comrie took on a significant role with Project 11 this season.  Project 11 is a program inspired and created in honor of Rick Rypien #11, a former player with the Winnipeg Jets and Manitoba Moose who passed away tragically in 2011. Project 11 is available to support students in grades five to eight with virtual tutorials educating students about mental health.  During his seven school visits throughout the season, Comrie participated in learning activities with students and provided support to the classroom teachers. Students enjoyed getting to know Eric and appreciated his openness and honesty around topics meaningful to them during their middle years (ie: stress, friendship, body image, relationships, self-esteem etc.).  Comrie also held many post-game meet-and-greets with Project 11 students following select home games.

In addition to his solo-efforts throughout the season, Comrie made numerous appearances with his teammates around Winnipeg.  Ahead of the holiday break, Comrie and the Moose prepared food for patrons at Siloam Mission.  On February 6, the Moose fanned out to local schools as part of their Stick to Reading Program and Comrie read with students from Dalhousie School for the afternoon.  On February 20, the team stopped by Assiniboine Park Zoo to visit with over 1,500 fans in support of the Journey to Churchill exhibit and Polar Bear Rescue Team.  During the month of March, Comrie was a feature player in the Manitoba Moose Autism Awareness campaign and participated in a community practice on March 19 where the Moose scrimmaged with a minor hockey team and visited with fans.

Comrie, 21, is now one of 30 finalists for the AHL’s 2016-17 Yanick Dupre Memorial Award, honoring the overall IOA/American Specialty AHL Man of the Year. The league award is named after the former Hershey Bears forward and AHL All-Star who died in 1997 following a 16-month battle with leukemia. The winner of the Yanick Dupre Memorial Award will be announced by the American Hockey League at a later date.