Hockey insider Elliotte Friedman chats about the Jets top pairing D man as well as the team in general.

Hockey insider for Sportsnet Elliotte Friedman was on Boomer & Warrener on Sportsnet 960 today and the topic of the Winnipeg Jets came up.  He was specifically asked about Jets defenceman Jacob Trouba, who is a restricted free agent. 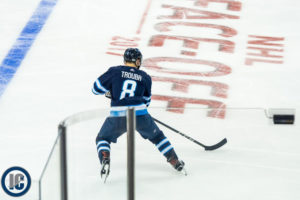 “The one thing I really do believe is, I think he does like playing in Winnipeg. I think the only times that he gets frustrated are when he gets moved to the other side. So last year when Myers was hurt and him and Byfuglien were eating up all the time on the right side, I was told he was really happy. That to me is the big thing is what’s the contract going to be? Are they going to be able to extend him to a point where we’re not talking about this every day. That’s going to be the challenge. I think he is playing really well.”

He then spoke about the team in general, the favourable contracts (Scheifele, Ehlers, Myers) as well as the fact that the team needs to sign Patrik Laine.

The hockey insider concluded with this about Trouba “….I just think on Trouba they let it play out, they see how they do and they take a stab at signing him long term.  And I think they’ll see if they can do it.  The one thing I really find about him, and I’ve heard it from many people, is as long as he gets to play the right side, and he gets a lot of minutes, he’s not a guy whose got a problem. It’s when he gets moved to the other side is that he starts to get upset and that’s when he’s not happy about playing there.”

The good news for Jacob Trouba is he has been a fixture on the right side in the top pairing for the Winnipeg Jets all season long and while his minutes are down slightly this season (averaging about 21 minutes) that isn’t unexpected with a healthy group of defenceman who can all eat up big minutes.

To listen to the full chat with Elliotte Friedman which starts at the 40 minute mark (and runs about two minutes) click here.