At the Pearl Jam concert on Saturday night, Jets fever was in the air. When an impromptu “Go Jets Go!” chant broke out during one of the encores, lead singer Eddie Vedder, joined in with his guitar in the singing of “Go Jets Go”. Watch the video below

Vedder then toasted to the Jets, and told a story about a conversation he had with Jets defenseman Randy Jones:

“He was telling me a story, him and his girlfriend. His name is Randy Jones, he’s a defenseman. He and his girl were driving I believe from somewhere like New Brunswick, but it was a 36 hour drive if I’m getting my facts straight, he said for 35 hours he played just the Pearl Jam radio station (on SiriusXM).

It’s a testament to their love and appreciation for each other, when it wasn’t until hour 35 when she said: “you know just this last hour, can we play one other thing, something else”. I appreciate that person already, but in a very strategic move, I’d like to dedicate this song, of love and hope and happiness to both of them in hopes that they are in our good graces forever.

But I do think that 36 hours is too much. You’ve got to fit a little Sonic Youth, or Mudhoney in there. So this is for Randy (and his girlfriend).”

As a user of satellite radio, I can agree that the Pearl Jam station is awesome, playing a large collection of studio and live tracks. Randy Jones must be a die hard Pearl Jam fan, if he is going to listen to one band for 35 consecutive hours. Personally, I would spend most of my time on the Howard 100 station. Illegal Curve will forfeit watching football tomorrow afternoon, to get more on the story from Randy Jones.

Pearl Jam releases all of their live concerts for sale on their website, this should be a nice collectors item for Jets fans when it is released.

The band is known for their unique tour t-shrits, a special “Pearl Jam Winnipeg 2011” t-shirt was available for sale in the style of the Winnipeg Jets original WHA logo. 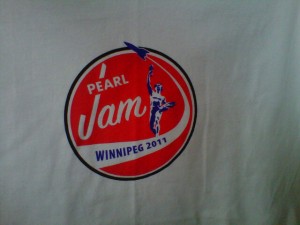 credit to derbydave at the Ten Club Community