Dorky Penguins Fan a Victim of Practical Joke–Dorkiness confirmed as Fact, Though 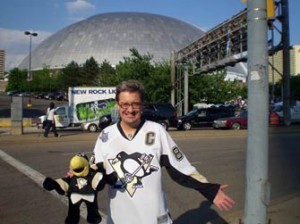 As a follow up to the article and link I posted Sunday afternoon, I have had the pleasure to speak to the “dorky Penguins fan” named Jason, and I provide the following transcript of the conversation. While the identity of the pranksters still is not confirmed, I salute them for embarrassing Jason on an international scale.

The conversation begun with me sending him the link to the Deadspin story ( http://deadspin.com/5216697/penguins-fans-are-not-at-all-desperate-hard-up-for-dates) outlining his purported desperation. (Please note that so as to not continue his humiliation, I have removed his last name from the conversation thread, and that the entire conversation should be considered “sic”)

Here is the response:

Did you know this was on Deadspin?

Holy crap… I thought YOU put that up there. They must have got it from the Penguin insider site I belong to… .

I found it on Deadspin. I had nothing to do with it besides disseminating it to my adoring public

I sent an e-mail to the guy who wrote the story… gonna find out how I got in the middle of it. The original Craig’s List posting is gone… .

Did you actually post the original ad on craigslist?

No… that’s what is so weird about this!

How did my picture end up on there? It may be one of my hockey buddies having some fun. The picture is on my web site, facebook, the Penguin Insider site and other places… so anyone could access it.

If the individual or individuals would like to take credit for the tremendous practical joke, please email drew@illegalcurve.com so I can interview you, and increase the publicity surrounding this wonderful practical joke. I don’t know if I am Woodward or Bernstein, but this has the potential to be the next Watergate.

For www.illegalcurve.com, I am Drew Mindell