A hockey roadtrip, why not!  There is something quite exciting about supporting your team when they are on the road.  Perhaps it is the thrill of an impending thrashing (hopefully only verbally and not physically) at the hands of the opposing teams fans whose arena you’ve invaded but as David Puddy said on Seinfeld, “you gotta support the team”.

In fact a number of members of the IC Crew will be doing just this when they take on the New York area in November to celebrate the stag of Illegal Curve Radio show host Drew Mindell, by attending the Jets games against the Islanders, Devils, and Rangers.

Here are Dave and Ezzy’s Top 10 Winnipeg Jets away games for this season:

Reason:  A number of reasons jump out at me to attend this game.  One is I’ve always liked the Predators franchise.  I like the way they’re run, the loyalty they’ve shown the GM & Coach and the way they’ve built up the fan base.  As well, Head coach Barry Trotz is from Dauphin, Manitoba.  But the #1 reason to see this game is that the Preds are selling it as an opportunity for Thrashers fans to come down and cheer or jeer their former club.  If they show in big numbers, it could make an otherwise unremarkable game, quite significant.

Reason:  Proximity could make this our best rivalry, although the Jets 1.0 and North Stars never really had much of anything in terms of mutual animosity.  You can expect a ton of Winnipeg support to be heading down to see this contest as they did during the 2011 NHL Entry Draft which should make the already incredible atmosphere at the Xcel Energy Center in St. Paul quite over the top.  Plus Minneapolis/St.Paul is one of the best cities to visit. 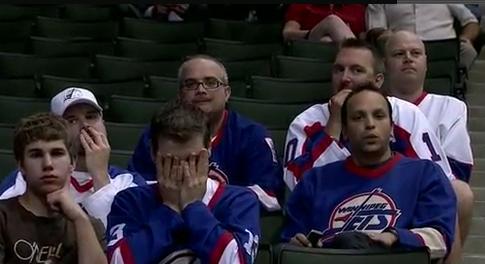 Reason:  Could a sea of white wash out the arena full of red at the Verizon Center?  The crowds in Washington always seem to be partying and I love that the entire arena is decked in red gear.  This game could have some playoff implications as well.

Reason:  There are a ton of former Peggers’ who live in T.O. and I’m sure the A.C.C. will be rocking with Jets fans in what is the just the Jets 4th away game in their young existence.

Reason:  I always liked the Flames even though when we weren’t having our hearts torn out by the Oilers, it was being done to us by Calgary but for some reason I never liked the Canucks (probably because of the playoffs in 92 & 93 and Mike Peca’s hit on Teemu Selanne).  Having said that, I love the city of Vancouver (easily one of the best cities in North America to live) and with the former Moose/Canucks relationship, the rivalry should begin anew between these two cities.

Reason:  There seems to be something magical about the Bell Centre in Montreal.  Everyone I’ve ever talked to has said it just has a great atmosphere for hockey and to be able to cheer on the Jets in this arena would be quite fun.

Reason:  When we went down to support the Flames at Game 6 of the Stanley Cup Finals in 2004, we all wore our Jets gear and were warmly embraced by the Calgary crowd.  Perhaps it was nostalgia for our old Smythe division rivalry but we got a lot of love down in cow-town.  The Saddledome is a fun building and I’m looking forward to seeing the rivalry renew between these two teams.  (can anyone recognize which former Flame is embracing us?) 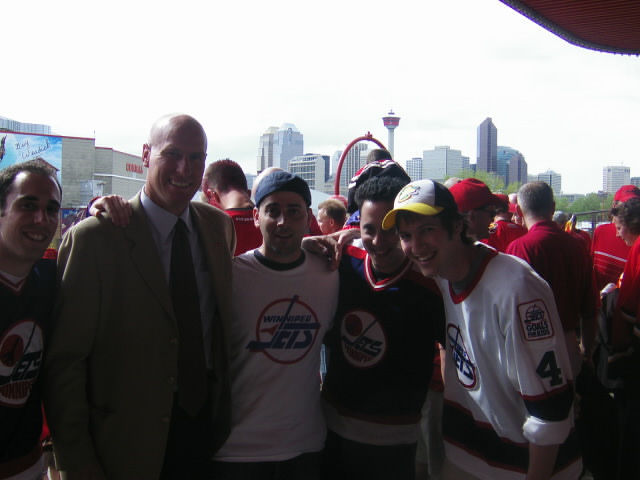 Reason:  I spent a number of seasons cheering on the Red Wings at Joe Louis Arena and I love the building and the people in Detroit.  It is a great sports town and my Jets gear always got a good reception when I wore it to games.  To be able to see the Jets playing again in this venerable building would be quite the thrill.

Reason:  The Hawks and Jets have a number of ties.  We have a former Hawks employee running the show in Winnipeg, they are led on the ice by captain Jonathan Toews (one of  our favoured sons) and I’ve always wanted to see a game at the United Center.

Reason:  The Coyotes home opener is going to be well attended…by Jets fans.  There are already rumblings that a number of Jets fanloyalists will be invading the Jobing.com arena to support the Jets 2.0 against the Jets 1.0.  As was the case when I picked the Coyotes as the 3rd home game to see, the rivalry is more fan centric, than between these two teams, but it should make for a really fun, hopefully respectful, game atmosphere.

Reason:  I start my Top 10 list early in the season with the Jets first away game in Canada against the much hated and much loved Maple Leafs of Toronto. The Jets and Leafs will do battle four times this season but this game will be the first and will set the tone for the season series.

Reason:  The Jets last regular season against the Red Wings was back on April 28, 1996, a 4-1 home loss. But the last time the Jets played in Detroit was April 21, 1996, a 3-1 win which was highlighted by a 52 save performance by a young Nikolai Khabibulin. So you know what that means? The Jets are on a one game winning streak in Detroit. But seriously, the Joe Louis Arena is an amazing arena and the Jets have always had memorable games there. This will be a great one for hockey fans.

Reason:  The Jets will play the first of two away games against the Original Six Habs on January 4th before a national tv audience on CBC. The Habs are a team that the Jets will be directly competing with for a playoff spot. This will be an interesting game because it will come after a three day break for the Jets after their New Year’s Eve home game against the Maple Leafs. A win in Montreal on the road would start the year 2012 pretty nicely  for the Jets wouldn’t it?

Reason:  The Canucks do not visit Winnipeg during the regular season which means that this game is going to have extra entertainment appeal. What’s especially intriguing about this game is that it will come after a three-week, 8 game homestand for the Winnipeg Jets.  I think it’s safe to say that this game will have extra motivation for each team as the Jets will either be in the middle of a playoff race or looking to play spoiler against the powerhouse Canucks.

Reason:  The Winnipeg Jets had a great rivalry with the Calgary Flames spanning  the mid 1980’s to the mid-1990’s. In fact, the Jets only playoff series victory came against the Flames in 1985 when Dale Hawerchuk, Thomas Steen and Paul MacLean were playing for the team.  The Flames are the closest Canadian team to Winnipeg and were adopted as one of the city’s favourite teams to cheer for starting in 2004 when the team almost won the Stanley Cup. But now the Jets are back and we want to beat them in their home rink.

Reason:  Speaking of cities close to Winnipeg, Minneapolis is only a 7 hour drive from the River City. This game is going to surely have a lot of Jets fans in attendance but one of the reasons I included this game high on my list is because it is widely expected that the Jets will end up playing in the same division as the Wild next year. That means that the two teams will potentially meet six times next year, as opposed to two. But really this game will be great for fans because of the close relationship between the Twin Cities and Winnipeg.

Reason:  The first away game for the Jets 2.0 will take place in Windy City Chicago against the 2010 Stanley Cup Champions and the storylines have already been well documented. Toews, Keith and Sharp have ties to Winnipeg while GM Kevin Cheveldayoff was the Hawks Assistant GM last year. The reason why this game will be so great for fans is that Dustin Byfuglien and Andrew Ladd were very popular during the team’s Cup run and will surely have extra motivation to beat their old team.

Reason:  You might be scratching your head over this one and trust me you won’t be alone. The reason why I put this game at #3 is because of the timing. This road game comes after a six-game homestand for the Jets which ends with three games in four nights against the Islanders, Canadiens and Penguins. The Jets and Avalanche are two of the youngest teams in the league and this is the only time they meet this season.

Reason:  The first reason why this game is 2nd on my list is because there will probably be more Winnipeggers in attendance at this game than their will be Glendalers (is that the right word?). The second reason is this will be first time in history that the Winnipeg Jets 2.0 will play the Winnipeg Jets 1.0. This game is going to be on Hockey Night in Canada and is going to be extra special. Winnipeg Jets fans rock their jerseys proudly everywhere  but on October 15th in Glendale, it will be different. Much different.

Reason:  Right off the bat, I’m going to admit that this game is #1 on my list because I have already booked a flight to New York for early November and will be in attendance at this game. Additionally, I was (still kind of am? ) a New Jersey Devils fan for over 10 years and I’m going to absolutely love watching Martin Brodeur, the greatest goaltender of all time in my opinion. It won’t hurt either that the Prudential Center is one of the newest rinks in the league. Go Jets Go!

Remember, these are just Dave and Ezzy’s Top 10 lists.  You may have a completely different list.  We always want to hear what you have to say.  Let us know in the comments section, what your Top 10 would look like and why you chose those games.