Could the Winnipeg Jets face off against the Minnesota Wild at Target Field in a 2021 Winter Classic?

Might the Jets be heading south for a Winter Classic? 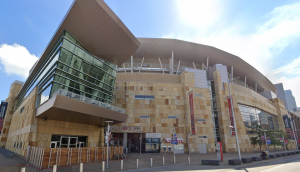 Michael Russo of The Athletic Minnesota wrote an article today about the 2021 Winter Classic and he indicated that it is looking fairly certain that Minnesota will be the host. Russo then speculated about who the Wild opponent might be and he listed the St.Louis Blues and Colorado Avalanche as the first and second most likely opponents and in the third spot (5-1 odds) he listed the Jets.

While it would appear some of the principals would be in favour of this match-up the TV rights holder (NBC) may not love the idea of Winnipeg and St.Paul based NHL teams battling despite the natural rivalry between the two franchises.

Russo also lists Jets captain Blake Wheeler (Plymouth) as part of the Minnesota storyline but he leaves out a host of other players from the Land of 10,000 Lakes who are currently members of the Jets organization including Tucker Poolman (East Grand Forks), Neal Pionk (Hermantown) and 2017 2nd round pick Dylan Samberg (Hermantown).  Honourable mention to goaltender Jared Moe (New Prague).  And while it seems unlikely who knows what will be with Dustin Byfuglien in 2021 (Roseau).

Would you like to see the Jets in another outdoor game?  The Jets have taken part in the 2016 and 2019 Heritage Classics to date and I suspect Jets fans would travel in droves to the Twin Cities to watch this game between the Jets and Wild.