Darryl Sutter says he’s the best man right now to coach the Calgary Flames, but he’s looking at other candidates before he makes his final decision. 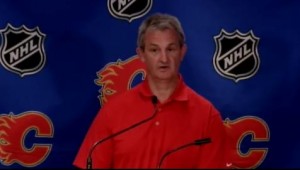 Four days after the Flames announced the firing of Mike Keenan, Calgary’s general manager told reporters he wants to have a new head coach in place by the NHL entry draft June 26-27 in Montreal.

“Right now I’m the best one,” Sutter said when asked when he was in the running for the head-coaching job.

“All the best coaches in the league are under contract.

“There’s three guys who are excellent. I won’t tell you who they are, but then I’m fourth.

“If I find out at the end of the search that I think I’m the best candidate, then I am the coach.”

Not wanting to let his Provincial rivals get all the media attention, the Flames held a press conference in which Darryl Sutter disclosed nothing really aside from the fact that he feels he would be the best candidate to coach the Flames if he was unable to get the 3 other guys he considers worthwhile.  I’d be curious to know who the three on his radar are (Aside from his brother Brent).

Any thoughts as to who the two remaining qualified candidates are?  Sound off in the comments if you think you know.