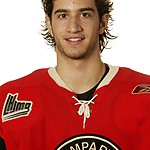 McArdle has played 33 games for the Panthers over the past three seasons, registering 1 goal and 2 assists.

Instant Analysis: More than anything, this is a trade to see if a change of scenery can jump-start the careers of these former first round selections. So far, their NHL careers can be summed up as insignificant, but both Florida and Winnipeg are hoping that new surroundings can provide new results.

As Illegal Curve’s Richard Pollock tweeted (@ICrichyp), “McArdle is more NHL ready than Esposito and can compete for a spot right away. The Jets are creating nice competition for the bottom six forward spots.”