Breaking news: Grant Clitsome had back surgery and is out indefinitely 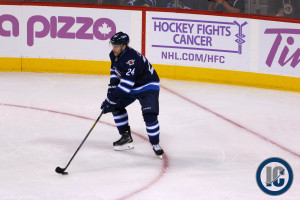 On January 5th coach Maurice announced that Grant Clitsome was back on the shelf.  Tim Campbell of the Winnipeg Free Press asked in the scrum on the 5th if the injury had anything to do with Clitsome’s back problems from last year to which the Jets bench boss replied “I’m on a need to know basis in the medical room…he has an upper body injury”.

Ted Wyman of the Winnipeg Sun reported this morning that Clitsome had surgery on his back and will be out indefinitely.

Coach Maurice in his pre-game comments to the press announced that the surgery took place in L.A. this morning on a recurrence of a previous injury.

Clitsome was limited to 32 games last season before back surgery in January of 2014 ended his year.  He had played in 24 games this season.

Coach Maurice also indicated in his scrum that “this is going to be long-term rehab. We’re quite hopeful he’s going to return and be an NHL player.” (quote courtesy of Ted Wyman).