Blake Wheeler heads to Germany to play some hockey during the lockout.

According to the official site of EHC Red Bull München verpflichtet Blake Wheeler has signed with their team.  We have also confirmed this with Wheeler’s agent Matt Keator; 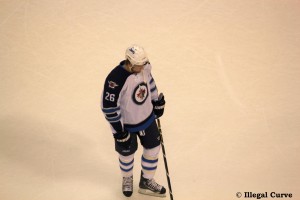 The EHC Munich Red Bull on the injury of his offensive forces responded Jason Ulmer (whiplash injuries of the cervical spine) and Toni Knight (medial collateral ligament tear in the knee) and NHL star Blake Wheeler committed. The 26-year-old striker comes on 1 November in Dusseldorf for the team and completed as early as 2 November at the away game against the Dusseldorf EG his first game for Munich.

EHC Manager Christian Winkler: “Once again it has been shown that patience pays off. Blake gave us the feeling that he is looking forward to this challenge. The discussions with him were totally uncomplicated and are always expired highly professional. ”

Blake Wheeler: “The club has worked hard for me, I have of course taken note. Playing on the new challenge for me, for Munich in the DEL, I’m looking forward. ”

The U.S. hockey player Blake Wheeler was born on 31 August was born in 1986 in Plymouth / Minnesota. His NHL debut was the father at the 2008 Boston Bruins. 2011 of 1.93 meters wide Wheeler moved to Canada at the Winnipeg Jets. He took it to the last NHL season in 80 matches on 64 points scorer and was top scorer of his team. Previously completed the right shooter 345 NHL games in which he could with 75 hits and 122 assists achieve 197 points. For the Red Bull EHC Munich Wheeler will accrue to the back number 27.

The obligation of the NHL stars enabled the company drive.de. “Without the financial commitment of drive.de we had not been able to realize this is so important for the EHC of Personnel. I would therefore like to thank the colleagues of drive.de, “Winkler said after the obligation Wheelers.