Betting on the First Overall Pick: Odds on Each Player to Go #1

Much has been written about which player the New York Islanders will select with the number one selection. Garth Snow has known which player he wants since a few days after the Islanders won the draft lottery. Snow, however, refuses to divulge his team’s selection, leaving fans to speculate.

Will it be Tavares, Hedman, or Duchene? Most indicators point to Tavares, but at least one writer feels that it could be Matt Duchene.

A few sports books have been offering odds on which player will go number one. While all agree Tavares is the favorite, each book differs on the odds of him going first overall.

The books that have posted odds on the NHL draft over the past week are “The Greek,” “Stan James,” “Betssafe”, “BetED”, and “Betfair”. Betsafe is the only sports book to still have NHL draft odds posted.

Odds on an event correspond to a percentage change of that event occurring. For example, assuming no vig, an outcome that is +100 has a 50% of happening; an event that is +200 has a 33.3% chance of happening. 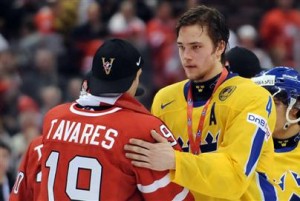 Tavares is the clear favorite to be the first pick. Betsafe had Tavares as low as -227 (69.4% chance) earlier this week. Generally, the odds on Tavares to go first overall give him about an 80% chance of being drafted first.

Currently, Tavares is -285 at Betsafe. If you think there is a greater than 74% chance Tavares will be drafted first overall, there is value making this bet.

As Tavares’ stock has been falling, Hedman’s has been rising. Many mock drafts and analysts project Hedman to be selected first overall, but ultimately most pundits have gone with Tavares.

Currently, the Betsafe has odds of +700 on Duchene to be drafted first, implying a 12.5% chance of Duchene being the first selection.

Though it looks like Tavares will be selected, anything can happen when it comes to the Islanders. There is no way to know for sure who will be taken first, and betting on the NHL draft would actually make it watchable. The first five minutes at least.

Betsafe also has a number of other interesting props including the number of Swedes drafted in the first round and some head to head props on which player will be drafted first.

Who do you think will go first overall? Better yet, what are the chances of each player going first?