One Winnipeg Jets fan won the 50/50 draw not once, but twice this season

One lucky Jets fan figured winning the 50/50 just once wasn’t sufficient so he decided to win again. 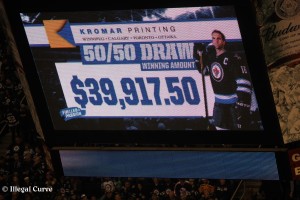 Like most teams around the National Hockey League, the Winnipeg Jets run a 50/50 draw at every Jets home game.  The size of the pots have drawn a lot of notice from around the league and we have even created the IC 50/50 contest to have some fun with this promotion.

One lucky Jets fans this season must have a proverbial horseshoe when he buys his 50/50 tickets.   Not only did Carlos Labao win $39,437.50 at the Jets and Flyers game back on February 12th, 2013, but he closed out the month of February by winning an additional $40, 970.00 at last night’s Jets and Devils game.

The question is can Carlos win again and if so, would this qualify as the greatest hat trick ever scored at the MTS Centre?

And just because you don’t win bags of cash during the 50/50 doesn’t mean you cannot also be a winner.  If you send us a tweet @illegalcurve using the hashtag #IC5050 on game day you can win some great IC Gear.