Now that Dany Heatley has finally been traded to San Jose, let’s take a second to analyze a trade that seemingly took all summer to complete.

First off, it was clear last week and is now that the Sharks’ trade of Christian Ehrhoff was made to create cap space for a future deal.  Rumor had it that Heatley was San Jose’s guy and those rumors proved correct.  With Ehrhoff’s salary off the books, San Jose had more financial freedom to make a big trade for the former 50-goal scorer from Ottawa.

Today’s deal can be broken down as follows:

Dany Heatley–four years remaining on his contract at a total of a $7.5 million cap hit per season.

Milan Michalek–five years remaining on his contract at a total of $4.3 million cap hit per season.

Jonathan Cheechoo–two years remaining on his contract at a total of $3 million cap hit per season.

Let’s first examine the addition of Heatley to the San Jose roster.  Heatley will almost certainly lineup alongside Joe Thornton to form one of the top offensive duos in the National Hockey League.  Thornton is arguably the best passer in the NHL and prefers to pass at almost every opportunity.  Heatley, in contrast, is a shooter first and foremost.  He has a terrific release and a bullet of a shot–so these two players should complement each other well.

Last season Heatley posted 39 goals and that was considered a poor season for him.  Most NHLers would kill for a 39 goal total but Heatley has posted 50 goals in two consecutive seasons (2005/06 and 20006/07) and scored 41 times in 71 games in 2007/08.  Needless to say he is one of the top snipers out there.  His addition to the Sharks should give the team a needed (it is hard to say much-needed with their offensive weapons) goal-scorer that has posted point-per-game numbers in the playoffs–where this team will need him most. 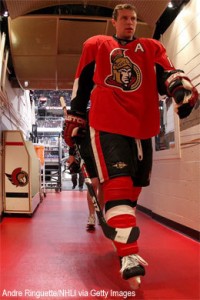 Dany Heatley and Joe Thornton will be one scary combination. (Picture courtesy of sportsnet.ca)

With today’s move, the Sharks could very well have assured themselves another first place finish in the Western Conference.  That being said, Sharks fans do not really care about regular season success anymore.  The playoffs are all that matters to Bay Area fans and they must be wondering what this trade does for them in that regard?  Well, as mentioned above, Heatley has posted very respectable offensive totals in the playoffs.  But the question I have is: Will Heatley step up when the games matter most?  Stats are one thing, but anyone who saw Heatley play in the Stanley Cup Final against Anaheim remembers his poor performance in all five games.  Simply, Heatley was virtually invisible when the series was coming away from the Senators, and while a player like Daniel Alfredsson imposed his will on the competition, Heatley was nowhere to be found.

So, consider me skeptical in terms of whether this move will payoff at crunch time, but it is almost impossible to argue that the move isn’t beneficial to San Jose’s regular season and, maybe even, first round success.

As for Ottawa, GM Bryan Murray was between a rock and a hard place.  Heatley demanded a trade, it became public and then he rejected the trade the Senators made when he was dealt to Edmonton.

The key to this deal for Ottawa was Michalek–who is a great skater, with good size and pretty good hands.  Michalek skates like the wind and is not afraid of contact.  In fact, he is the type of player Ottawa has been looking for for some time now.  He is only 24 years old, although it feels like he been around for a while.  The last three seasons he has posted 26, 24, and 23 goals respectively and has never been a minus player during any of his four NHL seasons.  The Czech native had 36 even strength points last season (fourth best on the Sharks) and accumulated these totals without playing any significant amount of time with Joe Thornton (the same cannot be said for Marleau/Setoguchi).  There is also a physical element to his game (92 hits last season), which really makes him a solid all-around player. 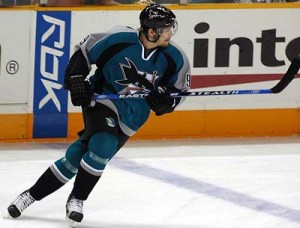 Milan Michalek is the key to this trade for the Senators. (Picture courtesy of sharkspage.com)

In Cheechoo, the Senators get a player who broke out with a whopping 56 goals in 2005/06 while playing shotgun with Joe Thornton.  That season really did come out of nowhere considering Cheechoo had never even scored 50 goals in the Ontario Hockey League.  In 2006/07 Cheechoo didn’t post 50 goals but he still scored a more than respectable 37.  Unfortunately for Sharks fans, Cheechoo lost his confidence and shooting accuracy and with that he lost ice-time–in the next two seasons, Cheechoo scored 35 goals combined.

So, are the Senators getting a 50 goal scorer or a 12 goal scorer?  I’d say somewhere in between.  Cheechoo needs to gain some confidence back and will probably get a chance to ride shotgun to a player of similar skill level to Joe Thornton in Jason Spezza.  I could see Cheechoo posting a 25 goal season in Ottawa and regaining some of the confidence he lost over his final two seasons in the Bay Area.  All in all, at a $3 million cap hit, Cheechoo is no albatross in terms of finances, so the Senators might as well take a risk on him because of his upside (remember he is only 29). 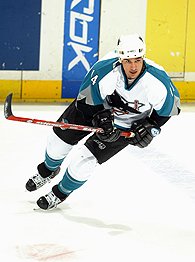 Can Jonathan Cheechoo regain his old form in Ottawa? (Picture courtesy of espn.com)

Finally, the Senators also received a second round pick in this deal.  If you are looking at the value of a second round pick, I wrote a piece examining draft round value for Puck Prospectus that you can read here.  In today’s day and age of the salary cap, draft picks are important.  Now, I realize this pick will be around number 60 overall but it still carries value, either for Ottawa’s prospect group or in a future trade.

Who won this deal?

You know, it is actually possible for two teams to both be relative winners in a trade and I think that is what happened today.  I don’t think either team hit a homerun today, as I have questions about Heatley’s ability to help a team win the big game, and the Senators still had to trade away a former 50 goal scorer.

That being said, the Sharks added a valuable piece and the Senators received pretty good young value for their disgruntled star.

I give both GMs a B+ for today’s deal.

Thrashers Preview over at Puck Prospectus
Economics of college hockey and banking on rivalries.