Winnipeg Free Press:  Mason thrilled with move, mask.  One of our favorite players to interview.  We have had him on the IC Radio show 3 times previously, although tonight’s show (at 6 pm cst) will be his 1st as a member of the Winnipeg Jets.

Winnipeg Sun:  Jersey ‘not even close’ to real thing.  Funny how everyone tries so hard to get the “scoop”.  When the jersey is released, we can enjoy it, but until that time people will continue to speculate.

Winnipeg Free Press:  Up close and personal with Zach Bogosian.  The Free Press series continues to introduce you to your Winnipeg Jets.

Jets Nation:  Postma hoping to take flight with Jets.  A little more from this Jets prospect.

Total Pro Sports:  9 most insane fan fights.  Hockey is represented in 2 of the 9 videos.  Perhaps the Canucks could learn something from their fans.  (After watching the video, maybe not). 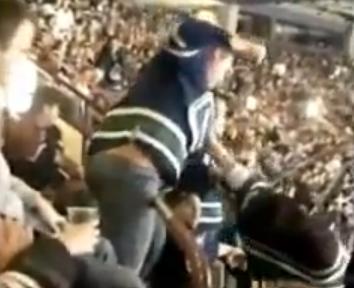 More from ‘Around the NHL’ after the jump including Jame Neal wanting to rebound, evaluating the goalie revamps from across the NHL and after 12 seasons Dave Scatchard calls it quits.

SportingNews:  Penguins James Neal counting on turnaround.  As someone who had him on my fantasy team, I expected the move from Dallas to Pittsburgh to boost his number (which they didn’t).

Yahoo Sports:  Ranking the goaltending revamps in the NHL.  I like the move by Washington more than Philadelphia right now.