A Primer to the Tricks, Traps and Machinations of the 2012-13 NHL Hog Ride

Sean MacDonald is an instructor in the Asper School of Business at the University of Manitoba in Labour Relations and Collective Bargaining. He will be contributing a regular column on Illegalcurve.com. His first article is about some of the current machinations of the NHL/NHLPA during the CBA negotiations.

Hello out there! We’re on the air,
It’s Hockey Night tonight;

The Great Stompin Tom Connors spoke for a nation when he celebrated (in Three Period structure no less) the trials and tribulations of scrubs on skates.  Stompin Tom’s snippet of  Canadiana,  continues  to resonate to cuckolded fans and is  performed at full throat in many an NHL reservoir.  It is safe to assume that as one of our national icons Mr. Connors did not consider the current square-dance between National Hockey League Commissioner  Gary Bettman and National Hockey League Players Association Chief Donald Fehr when he penned :

Tension grows, the whistle blows,
And the puck goes down the ice.

But here we stand on the cusp of a what should be a new NHL season hunkering down for a baron Saturday night schedule of CBC’s Movie of the Week. Where have you gone Mr. Cherry? And when will you come back?

The NHL has locked out the players. The player have scattered to Europe or parts beyond, the fans are left to find new hobbies or even reacquaint with family members.

Why are Donald Fehr and Gary Bettman driving us off this cliff?  Can the season be saved?   Here at the Illegal Curve Satellite Office we offer a three period assessment of the bargaining tactics of the NHL (First Period), NHLPA (Second Period) and finally proffer some unsolicited advice to get to a deal (Third Period).

While much of this may be over-harvested flora, our intent is to winnow out the usual chafe and focus primarily on the bargaining tactics of both sides.  The average fan will no doubt opine that any labour fight has a similar sedentary effect to watching curling on Xanex but hang in there fans, you have a lot of time these days.

During this Thanksgiving season we register that the invitation to the past seven NHL banquets has bequeathed both player and owner with a true horn of plenty.  The National Hockey League has expanded the total dollars collected from $2.2 billion to $3.3 billion since the cancellation of the 2004-2005 hockey season. 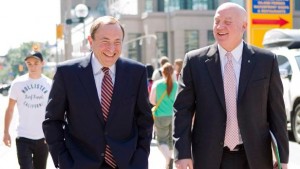 According to Forbes magazine, the average NHL Franchise is now worth more than $240 million.  This represents a 47% growth since the last lockout. Annual team revenues average $103 million. A national television deal with behemoth NBC is slated to generate approximately two billion dollars over the next 20 years and help create the continental exposure Gary Bettman has long lusted for.  The advent of a PVR habit and a cable universe-while diluting traditional media advertising has made live events a most cherished television property for now and into the future.  So why would the NHL business model so flush with cash and trending strong in most economic categories slide a sharp skate on its own jugular and again shut down the business?

In a word: Margins.

The NHL is not as profitable as it could be. As per the last agreement the league will pay 57% of hockey related revenue to the players. The owners feel that by cutting the player share to a more modest percentage they will increase their operating profit. They will also significantly increase franchise value by offering a more profitable venture to future investors.

Most analysts agree that the NHL would probably accept a 50% share of hockey revenue. But how do we get there?  Here at the Satellite Office we note some of the tricks and traps of the National Hockey League.

Below –in no particular order are some of the bargaining tactics and mistakes used by the NHL in collective bargaining:

In collective bargaining an aspiration point or target point is usually the upper limit of what any negotiator expects to get out of a deal. In 2005 Gary Bettman set his target squarely as the establishment of a hard salary cap and a kill-shot to his counterpart and nemesis Bob Goodenow.  There is no doubt Gary won on both fronts. Unfortunately for Mr. Bettman, he badly missed on other issues.

Mistake # 1 Leaving Money on the Table

The reason any organization hires a negotiator is to maximize the opportunities achievable in any deal. If they do not optimize then the company has left money on the table. Upon the acceptance of a salary cap the NHLPA was in the process of removing their leader from final negotiations. The NHL knew the union was both fractious and discouraged. The league had won this round and they wanted (not needed) to get back to repair the damage caused to both sponsors and fans. So in their hast they made a rookie mistake. They could have and should have locked down tougher rules on contract length, arbitration terms and–yeah you called it—more favorable revenue sharing.

When Gary Bettman assumed the post of commissioner in February 1993 the annual league revenue was $700 million and the average player salary was $560, 000. In 20 years as the captain of this swashbuckling armada Bettman has increased revenue by 450% and player salaries have increased by over 400%. The NHL, and Bettman specifically, are responsible for identifying and leveraging opportunities. The player contribution truly did not change during this time.  The players gave everything they had.  No one could reasonably ask any more from the glacial gladiators. The number of games and the level of intensity continued to max out. But it was the owners that grew the game. No serious analysis can disavow the commissioner from all the monetary successes the players enjoy.  Gary Bettman needs to frame a case based on the inescapable truth that management alone is the reason each player salary is so high.

When any party to a  negotiation  starts the discussion by asking for something outrageous this may elicit a non-response known as the chilling effect. The NHL owners erred badly when they proposed an economic buzz cut of over 20% in the salary cap. Add to the list some chastising contract terms (no free agency until age 29 and neutering all of arbitration rights) and the table was set for the chilling effect.  Since that over-heated day in July Donald Fehr has never really addressed the terms of this chilling first offer.  The NHLPA response as we will see was very different…….

Sean MacDonald is an instructor in the Asper School of Business at the University of Manitoba in Labour Relations and Collective Bargaining.  He will be contributing a regular column on Illegalcurve.com.