A Look Back at an Attempted Look Forward: Reviewing the IC 2008-09 Predictions 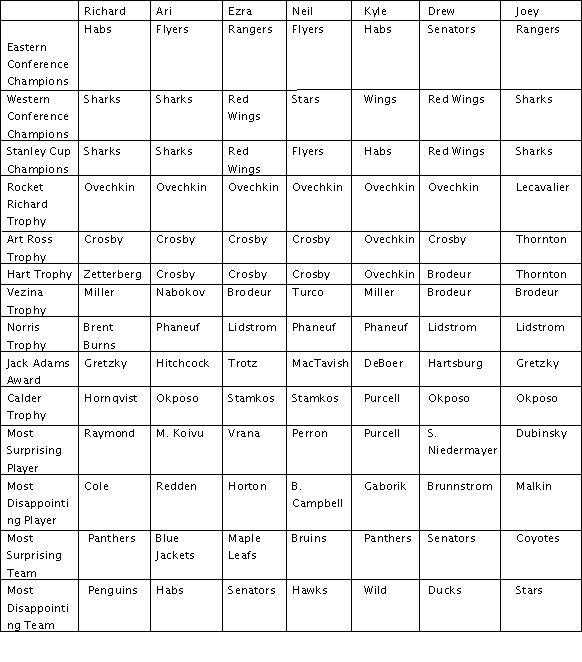 This handy chart first appeared on the site prior to the start of the 2008-09 regular season. With the regular season coming to an end today, and the real season set to begin, we thought it would be a good time to take a nostalgic look back at our early season predictions. I am not going to go through the entire chart, as I have the utmost in confidence that you don’t need my help to do that, but instead I will give out a few awards based on the predictions as well as a couple of bonus “it’s my article, so I can do it” awards.

The award for “Best Reason Why Casinos Don’t go Broke”: Me, for my dual prediction of the Ottawa Senators as Eastern Conference Champions, and Craig Hartsburg as Coach of the Year. Nothing more needs to be said about predictions of that quality.

The award for “Potentially Best Virginal Performance in 2009-10”: Richard, for his selection of someone named Hornqvist as the 2008-09 Calder Trophy winner. Unfortunately for Richard and his prognostication skills, the prediction still may come true, as Mr. Hornqvist didn’t “pop his cherry“, this year.

The award for “Boy Aren’t the Illegal Curve Writers Smart”: The San Jose Sharks, with honourable mention to the Detroit Red Wings. Three IC writers had the Sharks to win the West, and three had the Red Wings. Neil feels bad enough about his Stars selection, no need to mention it again.

The award for “Uh, We Meant the Other Guy”: Sidney Crosby. Five out of seven contributors picked Crosby for the Art Ross Trophy. Zero out of seven picked Malkin. Frankly, I blame Crosby for his poor performance, and certainly not the predictors for their choosing of him. Had he played harder, he would have made us all look smart. For shame, Sid, for shame.

The award for “See Sidney, This is What We Needed”: Alexander Ovechkin. Six out of seven contributors selected him as the Rocket Richard trophy winner, and barring something miraculous on the final day of the season, we will all look smart. Except for Joey. I suggest throwing tomatoes at him.

The award for “Depends on If You Consider Surprising, Good or Bad”: Neil, for his selection of the Boston Bruins as the “Most Surprising Team”. Presumably Neil picked them because he thought they were going to be surprisingly good. Regardless, now, the “good surprising” is going to be the flag he is flying.

“Most incomprehensible, Yet Hilarious Smack-down of Yours Truly”:  http://www.birdwatchersanonymous.com/2009/4/9/828689/in-a-low-class-by-themselves

Enjoy the playoffs, and thank you for your continued support of Illegal Curve.