A look at the Winnipeg Jets line of Ehlers, Scheifele & Laine

A closer look at one of the Jets top lines.

While secondary scoring remains an issue for the Winnipeg Jets they have been very fortunate this season to have (when healthy) a solid top six that has been mixed and matched to generate plenty of offence.  The latest incarnation for one of coach Maurice’s top lines has seen “veteran” centre Mark Scheifele (fourth year) link up with wingers Nikolaj Ehlers (second year) and rookie Patrik Laine (first year) to form a dynamic scoring line for Winnipeg. 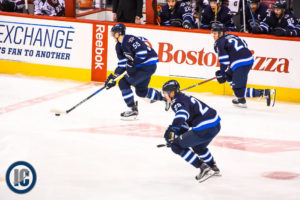 Each player is having a pretty remarkable individual season:

This has them sitting (tied for) 13th (Scheifele), (tied for) 17th (Laine) and (tied for) 19th (Ehlers) overall in NHL scoring at the holiday break with Laine continuing to lead rookies in goals and points (over Auston Matthews who is second, although he has played three fewer games).

As stated above the top six for Winnipeg have been mixed and matched throughout the season but this trio of Ehlers, Scheifele and Laine have played together for the last three games before the holiday break and overall have started the game on a line together 14 times.  In those 14 contests the Jets have eight wins, five losses and one overtime loss.

They were first put together in game 12 of the season when the Jets beat the Red Wings 5-3 in Detroit.  They combined for nine points that game.  Coach Maurice would keep them together for a total of eight of nine games (Detroit included) before breaking them up for three games.  He reunited the line in game 24 against the Predators (a win) and they would play together for a total of three games (Scheifele was injured against the Oilers in game 26 which was the third game in that set) and he then missed the next three.  The band got back together for game 34 against the Avalanche and haven’t looked back combining for 12 points in the last three games (two wins and one loss).

In terms of advanced statistics (for a glossary you can see below) a look at a few of the possession stats for this line (via Corsica) has their 5 on 5 as follows:

Coach Maurice has also used Blake Wheeler with Mark Scheifele quite a bit this season while interchanging Patrik Laine and Nikolaj Ehlers as their winger.  To date he has used Ehlers a total of seven times and Laine a total of eight times with 55 and 26 to start a game.  Not surprisingly the possession numbers are best when you have the more experienced trio of Scheifele centering Ehlers and Wheeler:

While it would seem that Ehlers, Scheifele and Wheeler would make the most sense based on the numbers it appears in the interest of balancing the lines the Jets bench boss has chosen to spread out the talent.  And Wheeler playing with Bryan Little and Mathieu Perreault has certainly done just that as they have produced some solid numbers (in 35:57 time on ice together) with a 67.47 CF60, 33.74 CA60 and a CF% of 66.67.

Individually Patrik Laine would be the “weak link” when it comes to certain advanced stats (CF%, FF%) but that is perhaps symptomatic of an 18 year old still learning the NHL game.  Of course the kid has 19 goals in 36 games so “weak” is a relative term. 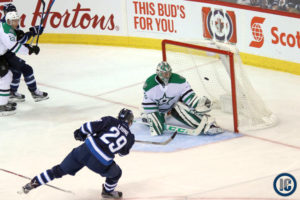 If you compare this line’s (score, zone, venue) adjusted corsi (CF%) to some other top lines in the NHL their overall possession numbers are still below more experienced lines (with 100+ minutes together) this season in the NHL:

As one would expect if we insert Wheeler for Laine this number improves to 57.11%.

However when we take a look at the on-ice shooting percentage of this line we see a very positive number.  This stat can be broken down as follows:

It counts all shots taken at the opponent’s net when a player is on the ice, including those by his teammates. It’s a measure of how successful a team is at converting its shots with a certain player on the ice, whether or not the player is the one doing the shooting.

This trio still have a ways to go before some of their possession numbers get to elite levels as presently constructed but they have provided fans with some exciting hockey to this point in the season.  If kept together and allowed to continue developing as a unit it should make for plenty more exciting hockey for fans in Winnipeg.