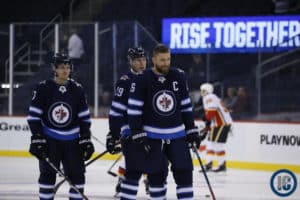 It seems almost inconceivable based on how he played last year but Kyle Connor was the last cut of camp in 2017-18 while Jack Roslovic was a December call up when Mark Scheifele got injured.  Of course Connor is firmly entrenched on the Jets top line while Roslovic will get an opportunity to centre the 3rd line.  New additions to begin camp from within the Jets system are 2017 1st rounder rookie Kristian Vesalainen and Brendan Lemieux, who spent the past two seasons with the Manitoba Moose and which included nine games with the Jets last season.

The Jets are technically at 24 players on the roster as a result of the sudden passing of Nic Petan’s father Franc.  The talented forward was granted a leave of absence from the team and will have non-roster status to start the season getting the Jets down to the 23 they needed to comply with NHL regulations.  Petan’s cap hit still counts however against the team total.